no toy for you! a lesson in cultural differences from japan 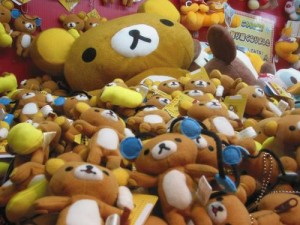 While I was living in Japan with my husband and two small children, I kept a running blog of our experiences. At one point, a friend asked me if there was anything about living there that really drove me crazy.

Honestly, there was very little about living in Japan that annoyed me, including some of the cultural differences that I understand drive many Americans crazy. For example, I knew a lot of Westerners who were constantly incensed while driving — muttering curses at pedestrians who didn’t yield to cars, etc. But since I was most often the pedestrian and not the driver, I tended not to see what’s so wrong about that. And I think many Americans in particular get annoyed at the whole “rules are rules, and they must be obeyed no matter what”-aspect of Japanese culture, but I didn’t run into many instances where I was truly irked by that. Bemused, perhaps, but not angry. If you lived in a country with so many people crammed into such small spaces, you would find that following the rules allows for a more peaceful coexistence than you might otherwise find. (Imagine riding the subway in New York City during rush hour and finding that it is almost totally silent – no one speaking to anyone else, no laughing, nothing. That’s the norm in Tokyo.)

However, one admittedly minor incident did get under my skin, both because it adversely affected my five-year-old daughter, and because it illustrated the downside of always following the rules and not recognizing the usefulness (and in this case, kindness) of making an exception. I took my daughter out to dinner at a local restaurant where she remembered getting a toy at the end of her meal when we’d been there in the past. This time, we sat down, ordered off the menu, and ate our dinner, but when we got to the checkout counter, there was no toy for my daughter. There *were* toys, right there in front of us, but the cashier told us they were only for kids who ordered off the children’s menu. We hadn’t been offered a kids menu, but that didn’t phase this woman. Neither did my daughter breaking into inconsolable sobs when she realized that she wasn’t getting the (crummy, cheap) toy that she so desperately wanted. Obviously, the woman was just following the rules. No kids menu, no toy, even if the kid had ordered a full-price adult meal

Needless to say, it soured my daughter on that restaurant from then on, but it did provide us with a lesson on one aspect of Japanese culture that we would encounter at other times during our stay in Japan. Recognizing that it was a cultural difference and not just rudeness on the part of the cashier helped both of us understand where the woman was coming from, and prepared us for similar experiences in the future.