polar bears in paris? travel to paris in december can be wonderful for kids! 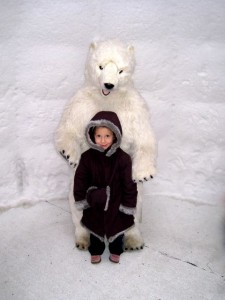 Have I mentioned we are crazy about traveling? Generally we look for an island with surf, sun and Mai Tais and that is our destination. However, our most recent travels took us on quite a journey. We started in San Francisco and traveled to Paris, Saudi Arabia, Egypt, back to Paris and then returned to San Francisco. Not your average destinations of choice for a husband, wife and 4-year-old daughter. Paris in December…the dead of winter, Saudi Arabia..a country you can’t even get into without sponsorship, Egypt….don’t only AARPs go there?, and back to Paris in January…hard to believe it was even colder than December. It was the most fantastic trip of a lifetime.

This will be the start to a series of posts about our travels, tricks we found to making it smooth and easy with a 4 year old, travel disasters you might like to avoid, cultural experiences and how we are trying to make it all stick in her long term memory.

One thing Olivia won’t forget is the polar bear in Paris….

Paris was fantastic in December. We knew we would be experiencing all the seasons of the year in the next 6 weeks and we had to pack the appropriate items in just a few suitcases. We packed nearly correctly for winter in France. The key to our warmth lied in scarves and hats. Although Olivia looked tres chic in her Tea Collection denim and a pair of pink suede boots, her parents screamed “silly Americans tourists” in their white running shoes. The French DO NOT wear white running shoes.

We had only a brief stop in France before flying to Saudi Arabia where there would be no holiday season whatsoever. We were quite looking forward to that. Until Paris. In Paris we were fortunate to get a different view of the consumer season. The merchants in Paris gave a very different feel to the holidays.

All the store windows in Les Galeries Lafayette (a shopping area that is several blocks) are decorated each year for the Christmas holidays. They are not trying to advertise or sell you what is in the window rather it is a huge competition between the mall shops to have the most awe inspiring sidewalk window scene. The window displays are so popular that the sidewalks can become overcrowded to the point of not being able to see…except for the children. Kids are treated to a stair-stepped platform in front of the windows especially for their viewing. Kids do not miss a glorious thing.

After viewing all the amazing windows, from floating babies to dancing penguins, we went inside to find the elevator to the roof. On the roof of Les Galeries Lafayette during winter is the most fabulous ice maze that wanders here and there, ultimately ending at an igloo with a surprise inside… a polar bear. A 6-foot tall stuffed polar bear. Kids are running around laughing and hiding while adults are amazed by the 360-degree views of all of Paris. It was a real unexpected treat in Paris. While we will remember the amazing magnitude of the Eiffel Tower, Olivia will remember the polar bear in Paris.