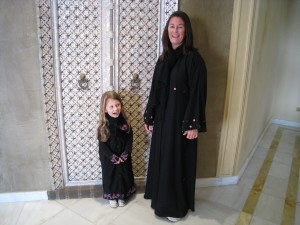 This is #4 of an ongoing dialog of our travel which included 4 countries and a 4 year old. Please check the prior archives for the previous sagas.

We departed our winter Christmas in Paris and jetted off to Jeddah for new cultural experiences and a new season, Hajj and summer. While there are some interesting things to do in Saudi Arabia, I understand it might not be on your travel itinerary soon but it was an experience of a lifetime for us.

We felt honored to be invited to see this very sacred country. Jeddah is very near both Mecca and Medina. We could not wait to experience living in a completely different society with drastically different customs. In the end, I would say I have never met so many kind people in my life.

We felt a huge resistance in acceptance of our traveling to Saudi Arabia from our friends, clients and even a preschool director. A small percentage of our friends and associates felt as excited as we did for the trip, a sad commentary on this day and age in our world. I was most disappointed in our neighbor who in an agitated state informed me that I, as a feminist, should never set foot in that country that demeans women and treats women as sub human. I told him that I was not sure what it would be like in Saudi Arabia and would go find out first hand before I would make any decisions about a county that I had not been too.

The Polar Bear in Paris was an amazing and unexpected treat for Olivia. The surprise in France, however, would soon pale to the surprise she would receive in Saudi Arabia.

Everything in Saudi Arabia revolves around the 5 prayer times a day. This makes any type of shopping nearly impossible. Stores open at 10am which is much like the U.S., yet less than 2 hours later the doors close and lock, the gates pull down on the windows of the store front and everything closes for the first 30 minute prayer time at 11:45am. The stores do reopen for 45 minutes but then close from 1pm-5pm. Business reopens again at 5pm but only for 45 minutes until the next half a hour prayer. They open again at 6:15pm for an hour then close at 7:15pm for the longest prayer time of the day, 45 minutes. They then open for their final period at 8pm and the stores are bustling until 12 midnight.

Isn’t that insane? People in Jeddah think so too. There was a time when it didn’t all close down. Many people I spoke to thought it should be changed back to the way it was when it would stay open and employees would pray in shifts. For now, though, everything just closes up over and over through out the day. As a visitor, you have to resign yourself to really rush and get in and get out of the shops or grocery throughout the day.

This crazy store schedule is where the most magical surprise came for Olivia, our four year old. If you get into a store and prayer time comes you are actually locked in the store. Olivia and I had an epiphany. The two of us had our driver drive like crazy to get us to Toys R Us by 7:14pm. This meant he went 40 mph not 25 mph; Saudi Arabia is a very slow relaxed place. No one is in a hurry except the Americans who are trying to get themselves locked into a toy store!

The toy store was the ultimate place to be locked in and trapped for the long 45-minute prayer. We rode bikes and scooters around the aisles. We played video games. We read books and drove cars. And we looked at EVERY doll. Prayer time came to an end, the lights came back on and the doors unlocked. We had touched and played with every thing in the store. Of course, you cannot leave the toy store without a little something (not Saudi rule, my rule) so I asked Olivia to pick anything she wanted. She chose a Barbie-like doll called Donya who was one of four in a set of Arabian Friends. Complete with Abaya/scarf and a hip outfit with really cute purse and boots. Then I couldn’t resist buying all the Arabian Friends for her….Muna, Amal and Ahlam.

She and I often talk about that fun experience we shared in Saudi Arabia while at home in San Francisco playing with our Arabian friends. When I say “how were we so lucky to be locked IN a toy store IN Saudi Arabia?” She replies “oh well it’s ma’shallah.”