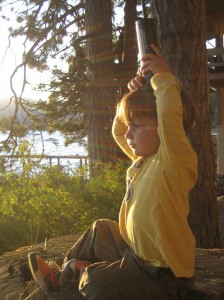 Earlier this month our entire family went up to Lake Tahoe for a vacation (grandparents, great-grandma, aunts, uncles, cousins – everybody). Our excuse was the wedding of a close family friend who got married at beautiful Chambers Landing on Labor Day, but we ended up staying for the week afterward, and it was glorious! The weather was beautiful, the lake and surrounding towns virtually deserted, the sales on great ski clothes hard to beat, and the mix of visitors was surprisingly international.

As a child, my family would visit Tahoe during the summer and over the winter holidays. But I could not remember ever having been there in the fall or following a long weekend. From what I could tell, most Americans frequented the area at the same times of the year that my family used to. However, this year, we saw a lot of people from western and eastern Europe and the Middle East, who seemed to have the right idea by visiting after Labor Day.

Even our 3-year-old noticed the foreign flavor amidst the pine trees and woodsy fresh air. One day, we were walking to the hot spring that overlooked the lake on the north shore, and we passed a large, young family that seemed to be from the Middle East. They were speaking what I took to be Arabic. After we passed by them, our son turned to us and said, “They’re speaking Spanish.”

My husband and I looked at each other with eyebrows raised, and we shared a silent little laugh and asked, “How do you know it was Spanish?” He struggled for a minute with his answer, so we tried to help him a bit. We said something like, “Are you sure it was Spanish or did it just sound different to you?” He thought for a minute and replied, “It sounded different to me.” We were interested in what he thought about this, so we continued, “did you understand what they were saying?” He said, “No, I didn’t understand what they were saying.” We said that we didn’t understand either, except when they smiled at us and said “Hello,” when they passed by. That seemed to sit well with him, and he nodded in agreement, “Yeah, they said hello.”

Another day, the larger group of us headed to a Mexican restaurant in Kings Beach, called Caliente. (The food was very good, especially the Mahi Mahi fish tacos and their signature drink, a mango tequila concoction called the Chupacabra – mmmmm!) After we told our son that caliente meant “hot” in Spanish, he had a hoot repeating it over and over again with a cheerleader-like fist pump, “Ca-li-en-te!!!” To add to the experience, my brother-in-law, who grew up in Santa Monica and loves authentic Mexican food, started teaching our son and his son (the two cousins were born just two weeks apart) all of his favorite Spanish words. The runner-up to caliente seemed to be picante. The two boys were climbing all over in hysterics yelling “caliente! picante!” Who were we to suppress such enthusiasm? Iye yi yi!

The whole week was relaxed and fun like that. It was great to bum around with the family on the lake and at the water’s edge. Some days the cousins used sticks with skewered hot dog bits to fish for crawdads (crawfish) among the rocks or off the pier, dutifully throwing them back after giving them a good look. Other days we paddled in a raft on the lake or swam in the pool that was fed by a nearby hot spring. At night, we played cards and drank hot cocoa or red wine. That was the Lake Tahoe I grew up with. There were a few moments, though, when we encountered sounds, sights or flavors from places much farther east than Nevada and farther south than Yosemite. And if that is the Lake Tahoe our son grows up with, that will be more than all right with me.