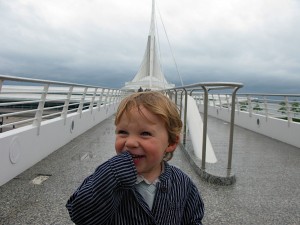 We’re just back from a fantastically chaotic 5-week travel binge- Boston, Cape Cod, New York, Chicago, a lake in Wisconsin, home (with a double-case of RSV caught somewhere in the germ-swamp of OHare).

Cape Cod: a whirlwind of parents and grandparents and children and sandy feet and beach crabs. 9 grown-ups looking after 6 kids, all under 4. Milo taught Alastair how to eat shells. Eeek.

Which was all a far cry from New York City, where we spent two glorious weeks in that perfect end-of-summer balmy – but not baking-hot – weather. It was a fun routine of elevators (“Mino push the buddon please to go down down down?”); cheerful doormen (“Mino say heddo to friend man?”); stroller rides to Washington Square Park for its plaza where the men drink from paper bags and play chess; and lots and lots of taxis, policecars, firetrucks, and other vehicles of New York’s Finest, including a fine horsie with tickly whiskers who says Neigh.

The lake in Wisconsin was the pinnacle of kid craziness. We had 10:11, with no child over the age of 6, and only one other over the age of 3. We stayed in our friend’s great-grandmother’s chalet-style rambling lake house, with a massive lawn sloping down to the lake, a rowboat, sailboat & motorboat, on-site tennis, and a huge porch that afforded the adults some wine-drinking and politics-talking time (Sarah Palin…really???) while the kids careened around the yard. Milo learned about bumblebees and spiders, and why we should only look and not touch. Alastair learned how to say “guh, glerrrrramph” and whack at the other babies.

Home via Milwaukee, where we stopped by Calatrava’s amazing bird-ship-like art museum sailing out over Lake Michigan for some play in the lobby. A magical white, windowy, watery open place with shocks of sculpture color, perfect for running and gazing and wearing out kids before our long (delayed) flight home.