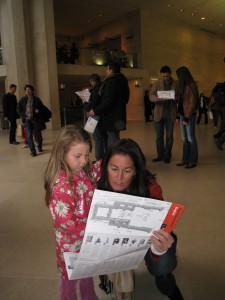 This is #8 of an on going dialog of our travel which includes 5 countries and a 4 year old. Please check the prior archives for the previous sagas

When Olivia was 3 we had stayed in the penthouse of a hotel in Mexico. We climbed into bed, all three of us, and she looked out the window to see Jesus. Not figuratively or a revelation … but a steel one. Not just any Jesus but a giant Jesus with his arms outreached, face looking to the sky and robes flowing on the hill across from the hotel. So giant was this Jesus that he had a blinking red beacon on his head so aircraft would avoid crashing into The Jesus. Olivia opened her eyes wide and said, “Hey Daddy! Who is that boy?” My husband said, “It’s a man and his name is Hey-soos.” (phonetic for Jesus said in Spanish) Days later we were returning home on the airplane and the flight attendant announces on the p.a., “Will Jesus Morales please ring your call button?” My daughter was sitting in the row across the aisle and one row forward from me. She swivels in her seat and looking over her shoulder gives me a thumbs up with a smile and a nod while saying “Heeeey-sooooos.” And thus was the introduction to Jesus for the pagan daughter of two fallen Catholics.

A year later, my husband, my now 4.5-year-old daughter and I were in Saudi Arabia. Naturally, I was emailing home to the States the amazing adventures we were having while my daughter Olivia was first standing on the chair next to me marching in place, then laying across the table behind the laptop, then spinning in circles next to me on the floor while humming Dance of The Sugarplum Fairies, culminating with rock-climbing up the back of my chair and slithering onto my back. While she was there and I was pretending she was not, she looked over my shoulder and saw one of the AOL Latest News pictures. She states matter-of-factly (remember she is 4), “Oh, huh. The Mona Lisa.” For the first time in 15 minutes she found a way to actually get my attention. Freak-of-knowledge usually is the winning hand for her. I stopped emailing (her mission accomplished) and craned my neck to look the monkey on my back in the eye and say, “WHAT? How do you know about the Mona Lisa???” “Little Einsteins”, she replies … again as if to say duhhh. We were soon to leave the kingdom of Saudi Arabia and travel to Paris, France. I said, “Olivia! Did you know the Mona Lisa is in the Louvre? We can go see it in Paris if you want?” She thought that was a more than fabulous idea and that was going to be our plan.

We arrived at the Louvre the first week of January, last year. We quickly looked for a map and found exactly where the Mona Lisa was kept. Getting to it was a tad more difficult. Sidetracked with the humongous art in the amazing Napoleon room, Olivia and I wandered off from Mike and found another room. We walked right into a face-to-face meeting of a huge, dark, scary painting of a dying man. Olivia says, “oh yuck Mom, that is really not a pretty paining! Who is that man?” I replied, “Oh that is Jesus Christ” to which she nodded her head yes while mulling over the notion and said, “ah, right. I’ve heard you say that before.” While I was trying my hardest to quickly determine if I should laugh or not, my husband Mike walks up to us, oblivious to what we were talking about, and calmly looks at the painting and says “Oh look Olivia, Hey-soos!” Olivia then has a manifestation of divine truth and replies “ohhhhhh Hey-SOOS. Why didn’t you say so Mom? I know who that is, we saw him in Mexico with a red light on his head.”