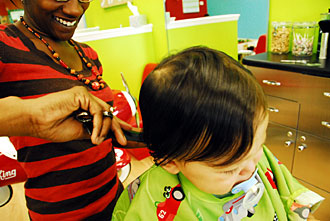 It took me nearly 2 1/2 years after my son was born to give him his first haircut. All along, I had cut his bangs a little, but never the back of his hair. For months, my mom had been telling me to cut his hair. Most of the time, people thought he was a girl. And, his hair was kind of wispy, not super thick. But I still saw it as my son’s precious baby hair, and it took me a long time to prepare myself to cut it.

My mom kept emphasizing that it’s good to cut hair, so that it stimulates the scalp (or something like that) and new hair will grow back thicker and stronger. Everytime we visited my grandma, she would lament after looking at his hair and say, it’s so thin. None of those reasons were good enough to me, though. I know in some cultures (including mine, Chinese), it is common to shave a baby’s head either at one month or 6 months or so, regardless of whether the baby’s a boy or girl. That way, the hair will grow back stronger.

The real reason I was motivated to cut his hair is similar to why I usually cut my hair (also rarely these days) — for a change. My son had just entered a two-week phase of being extremely whiny, demanding and tantrumy. Miraculously, he’s never gone through his “terrible twos,” at least how I imagined it, yet. But all of a sudden, in that two week span, it was really, really difficult communicating with him, and even just being around him for the entire day. I was frustrated. I wanted my child back!

I didn’t so much blame the hair, but talked to my mom about his behavior. She mentioned again that perhaps I should cut his hair; it might change his energy and give him better “qi.” There was a thought I could go with. After all, perhaps his long sideburns tickling his face (he was always pushing his hair away), his long locks rubbing his neck in the middle of summer, and his bangs were all just too much for him and added to his irritableness. I could buy that. And at that point, I was desperate for a change! It wouldn’t hurt, I thought. I had been preparing for this day for months, it seemed.

First, I looked up all the kid salons in the area. They sounded fun and great but quickly decided that I wanted to be the one to give him his first haircut. The next step was gathering all the gear (scissors, comb, spray bottle, mirror, popsicles and his favorite video).

I looked to YouTube for guidance and found an excellent video of a mom cutting her son’s hair. I followed her steps almost to the tee. Except instead of a lollipop (my son has never had candy before), I made popsicles, to make sure he’d sit still for what I expected to be a long and tedious process. Turns out I didn’t even need popsicles. My son dutifully sat for a full 30 minutes with his eyes glued to my computer screen, which was playing one of his favorite videos, Planet B-Boy. Before I put in the DVD, though, I showed him the youtube video and told him what was going on. Then i asked if he would like me to cut his hair too. He nodded enthusiastically. That was a good sign.

That made my job fairly easy. My partner documented the whole thing on video. I first put the back of his hair in a ponytail and then snipped it off. (That’s going in the scrapbook that I have yet to start on). After that, it was very easy.

I wondered what he would think, seeing himself in the mirror afterwards. He looked like a little boy now, bigger than a baby or toddler. I gave him the mirror and he just looked, and kind of gave a smile.  Then I think he forgot about it all and just started playing (as I cleaned up a mess of hair on the floor, chair, etc).

But i will say this: I believe the haircut did change his qi. He seemed a lot more pleasant overall, totally left the tantrumy phase, was just happier. And I was happier being able to see his lovely face, seeing him grow up. He looked different, for sure. It was definitely a big milestone, one that took me months to get ready for! I’ve given him one trim since then, and now he will see pics of people getting haircuts and tell me that “mama” gives him haircuts.