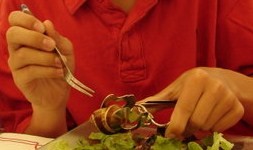 On our first day in St. Antoine de Breuilh, my nephew, Tyler, dug up snails from the yard surrounding our gîte. The next day, he ordered them off the menu, simmered in butter and Court Bouillon.

The twelve-year-old and his brother spent the last vestiges of that first afternoon searching for snails. Tirelessly searching along the vineyard’s floor, feeling along the cracks of an ancient stone wall, my nephews collected a dozen of the creatures for closer examination. Blossoming scientists, they both embraced and recoiled from the touch of the slick creatures, laughing with amazement as they expelled their toxic-yellow discharge after prodding.

This behavior I could understand. They were snails. Part of their charm is their inherent ickiness. But eating them? Ew. No way.

Sixteen years earlier, I had taken my own first journey to France. I was the same age as Tyler. I was thrilled to try red wine, cheeses that could outsmell dirty feet and a variety of root vegetables that were cooked in butter and cream. But the mere mention of l’escargot triggered my gag reflex. No matter how succulent, how delicious the advertisements, there was no getting over the fact they were snails. Slimy, oozing, disgusting snails.

But even as my nephew held a particularly large garden variety snail in hand, he emphatically told me, “Aunt Kayt, I want to try snails.” My sister told me he had admitted as much before they even crossed the Atlantic. When I asked why, Tyler only shrugged. “I want to see what they taste like. French people must like them for a reason.”

Indeed. But still – they were snails. I have consumed all manner of crazy things – grasshoppers, meal worms, large red ants. But I’ve always stopped short at snails. After all, a girl has to have some standards. As such, I imagined that Tyler’s desire for l’escargot was no more than just a boyhood fancy. That perhaps he would have the moxie to order them but when it came down to it, he would be unable to take a single bite.

The next day, as we sat in a charming outdoor café in Saint Emilion, the moment of truth came. When the garçon came by, my nephew ordered himself half a dozen snails with a s’il vous plait. I broke out the video camera, expecting to soon see defeat.

When the snails arrived, I anticipated some hesitation, followed by some protestations and perhaps even a little vomit. But after some initial trouble with the specific utensils, my nephew took a big bite and pronounced the escargot as delicious. His appraisal was even enthusiastic enough to get his 6-year-old brother to give the snails a go. He also declared them good.

Tyler offered me one, too. But despite his and his brother’s encouragement, I still couldn’t manage a bite. The repulsion was just too strong.

It’s funny, so often with children we think we are there to teach them, to encourage them to try new things. But for all of my supposed worldliness, when push came to snails, I found myself showed up by a twelve-year-old and his six-year-old brother.