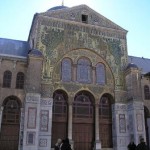 Several years ago when my son was about a year old, and I was five months pregnant with my daughter, we were trying to find a place to take a last family vacation with our small family before we grew one more person. At the time, we were living in Qatar and looking for an escape from the boring city of Doha during the Eid al-Adha holiday. We desired a fairly short flight, but insisted on going somewhere with real culture (ruling out the Gulf). This essentially meant Cairo, Damascus, Amman, or any number of cities in India. I was not ready to brave India with my pregnant self. Flights to Cairo and Amman were booked so we were left with Damascus.

Turns out this crapshoot turned into a wonderful trip.

Despite the fact the cobble stone-lined streets were not designed for our $40-lightweight stroller; the kebabs from the street vendor did not sit well with my pregnant belly; the Damascene taxi drivers didn’t have seat belts in their cars; very little English was actually spoken outside the major downtown area — it was still one of the most memorable weeks.

My son didn’t seem to care about the bumpy roads. We put aside our fear of taxis not driving in their lanes. No seat belts = no car seats so we hung on for dear life and prayed. If you’ve ever been to Damascus, you know why.

It just goes to show you first impressions can be deceiving. This poor smog-filled city proved to be a very family-friendly one. Even with our limited Arabic language, we had no trouble interpreting kisses the Syrian women planted on my son’s blond head. We even figured out bargaining at the souqs. They are master negotiators, but not necessarily great at math. We scored five Damascene tablecloths for less than $100. We hit all the major sites, Straight Street, the Umayyed mosque, and the Souq Hamidiyeh. Part of why my husband and I loveto travel is to see things from the other side. So during our trip, we spent the vast majority of the time in Damascus walking through regular city streets, sitting in local, non-touristy restaurants, and observing how Damascenes live their lives.

We were relieved that we could still do this, even with a young child. The trick is to revamp your traveling expectations. Kids still may need naps so plan for shorter outings and stay close to the attractions. Eating at nice fancy restaurants never works out with little ones. There are always great eats off the beaten path that will be just as yummy and cater to kids. Spending time in lines to see “sights” just for the sake of saying you were there, may not make the most sense. A trip to a neighborhood playground might give you all the insight you need into the local culture. Which was exactly what we did one day. Turns out next to it, you could get a small cup of Arabic coffee and smoke a shisha pipe while the kids played. Excellent!

Food and lodging are two of the major hurdles when traveling with kiddos. Our philosophy is to splurge as much as you can afford on the hotel and eat cheap.

Our hotel was the Cham Palace, classified by them as “one of the Leading Hotels in the World.” It was pretty weak for an ostensible five star, but it sufficed. One decision we made early on was that, if at all possible, we’d either spring for a suite or two rooms. Our son at the time slept for 12 hours at night, and another two to three during the day. So spending six waking hours in our hotel room every day walking on eggshells while he slept would, essentially, suck. The separate, connecting room turned out to be a fantastic investment. It meant we could put him to sleep, and then I could run out and get takeout from a restaurant, and we could have a good conversation over dinner, keep the lights on and read, etc. And by investment, I mean we managed the “embassy rate” for $85 a night, which came with two rooms smelling a bit like sewage and probably a wire-tapped room. But it was a cheap, clean and came with free yogurt one evening when my son wouldn’t eat anything else. Fortunately, the hotel was in the heart of everything (less than a 10-minute walk or death-defying $2-cab ride away) so made it easier to pop back and crash for nap each day.

When it comes to food, fortunately for us, our kids eat just about anything as long as ketchup is offered as a condiment. The Al-Kamal restaurant turned out to be our best bet. They had everything my son would eat: hummus, yogurt, cucumbers, lamb and french fries. We ate there at least everyday, sometimes just to get take out. Their family-friendly atmosphere allowed us to sit alongside several tables full of locals with strollers. The one day we decided to splurge on a fancy feast near the Umayyed mosque it was just as good, but twice the price and we had to keep our son contained as high chairs were not offered since you sat on the floor.

While I know my son will never remember this trip, I like to think these worldly experiences make us better parents. And if not, I’m sure it explains why both my kids love hummus.