haggling by the pound 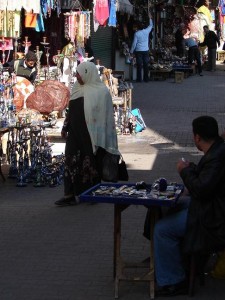 My husband tapped his foot impatiently as my son started to squirm in his stroller. It was time to move on — the morning was getting late and Cairo’s famous open-air bazaar, the Khan-al-Khalili, was becoming crowded. The alleys of the market were filling with tourists, fresh off the tour bus, and over-ambitious baksheesh men looking to take them to the “best” stalls for a small fee.

But I wasn’t quite ready to leave. No deal had been struck.

The shopkeeper, sensing my family’s irritation, looked at the small, ornate brass teapot in my hand and magnanimously said, “I can see your family is waiting. So I will give you a good price. Usually, this is 150 pounds. But for you, I can offer 100 pounds.”

It wasn’t a shocking sum. One hundred Egyptian pounds is less than $20 U.S. I would pay much more at the hotel gift shop or a store back home. And I could certainly afford to spend the money. But I knew I could get a lower price. I couldn’t walk away now. The competition had only just begun.

“Too much. But I can give you 20,” and then giddily waited for the expected outraged rebuttal.

I love to haggle. Whether it is in the bazaars of the Mideast, the open markets of South America, or just the guys selling fake designer bags on Canal Street, I cannot resist the heated back-and-forth price negotiation that transforms shopping from leisure activity to sport. Ever since my father introduced me to bargaining as a little girl while traveling in western China, I’ve been enamored with any situation where I can negotiate my own price. I love the feeling of having some say over whether an item costs too much, to assign my own value to the things that I want to buy.

And yes, I am not too proud to admit that I also enjoy the fight — with all the tricks, guilt trips, and fast talking that come with it.

So now, as my husband looks on with annoyance — and quite often, embarrassment — I am all too willing to insult merchandise, ignore tales of woe and throw small tantrums for monetary discounts that, in the country’s home currency, usually amount to only a few dollars off asking price.

The shopkeeper twirled the end of his mustache thoughtfully. “I can see you drive a hard bargain. You are a mother. You must appreciate value. But only 20? I am a poor man. And look at the fine work of this teapot. You will not see such quality in another shop. But maybe I can give this to you for 80 pounds.” He opened his arms and smiled widely as if he were bestowing a great gift.

I raised my eyebrow. By Cairo standards — a poor city at best — the shop seemed fairly prosperous. But by mine? It is unquestionable that the few dollars I would save on the exchange would mean much more to him than to me. And despite knowing this, I still could not relent. At least, not by more than it would take to keep the game going for a bit longer.

“Twenty-five. And I can go no higher. My husband and son are waiting,” I said with little remorse as I put the teapot back on the display case.

“Not enough! 70 and no less! Do you think I am Ali Baba?” he asked, raising his arms in mock offense. This is a phrase I heard often as I traversed the market, an allusion to the story in The Book of One Thousand and One Nights, an insinuation that the shopkeeper is a thief and can therefore let go of his merchandise for less than it’s worth. I smiled every time I heard it.

“No, no. But 70 is still too much,” and raised my offer to 30 pounds. He glared at me, tapping his fingers edgily on the counter, expecting me to become uncomfortable enough in his silence to increase my price. But I would do him one better. I nodded, thanked him for his time, and turned to walk out of the shop.

Before I reached the alley, he called after me, begrudgingly accepting my offer, his face fixed in a frown. I happily returned to receive my prize, trying not to look too smug in victory.

As I walked on to the next shop, ignoring my husband’s remonstrations so I might begin a new match over some papyrus and a small perfume bottle, I thought again of the shopkeeper’s reference to Ali Baba. Of course I didn’t think he was a thief.

But maybe, every now and again, I can see the attraction in thinking myself one.