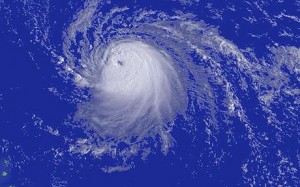 When the weathermen said we would be getting a storm we didn’t expect it to be of the magnitude it was. Ike rolled in and just as Mayor White said, we hunkered down. The winds started around 5pm Friday and then the rains, lightning, tornadoes and I’m sure some “unclassified” natural phenomenons began. It was the longest night of my life.

I continued to pace the house with a flashlight every 30 minutes to make sure the loud booms I was hearing weren’t broken window or a hole in the roof from a tree falling. My husband and daughter slept through the entire thing – even the loud popping and crashing of power lines and transformers every 2 minutes.

When the morning broke, it was vividly clear the destruction Ike left us. My street was completely flooded, huge 100 year old pines were literally picked up from their roots and thrown across yards, huge tree limbs and debris floated down our street like it was a river. Everywhere around us, our neighbors were in their fishing waders or rain boots, mid-thigh to waist deep in the water trying frantically to check on each other.

Meanwhile, my daughter’s allergy triggered asthma was acting up and not a single person in our neighborhood had power. In the rain and wind, I wrapped her up, grabbed her nebulizer and medicine and walked half a mile to the police station in hopes they had power. They did. The police couldn’t even give us a ride back to our house because the water was too high for their squad cars. And so, every four hours, we made the trek to the police station and accumulated an impressive collection of junior police officer stickers.

Saturday afternoon, we began the clean up. It took us six hours to get our front yard passable. I didn’t even want to look at our backyard. So without power, water and basically no contact with the greater Houston world, we did the best we could to keep a positive outlook and entertain our daughter who, at two and a half, had no clue what had happened.

Once the water receded, we ventured out into our neighborhood and to be honest, it looked like a war zone. Fences and trees were ripped apart and thrown everywhere. Power lines were snapped in half and dangling across streets. The park down the street was shredded to bits. It was so depressing, I didn’t want to go any further.

Saturday night, the rains came again. Winds were hitting about 30-40 miles per hour and of course, at 4:30 in the morning, my daughter needed another breathing treatment. Again, I wrapped her up, went out in the pouring rain and took her up to the police station.

Sunday morning when we woke, it was still pouring rain, high winds and we were flooded again. No one would know we had spent six hours cleaning the day before. Still without power and water and not a power service vehicle in sight, we waited for the water to receed and then we just headed out of town.

Now it is Wednesday, and I am writing this from my computer on a ranch in Llano, Texas. We can’t go home because we still do not have power on my block. My entire neighborhood has power, but of course, my block does not. Probably because the transformer is sitting in my neighbors’ backyard.

We’re grateful to be where we are as we have plenty of food, water, electricity (especially air conditioning!), but we are ready to go home. Ike has truly been a lesson for us. It’s amazing the things we all take for granted like power, clean water, being able to cook food and more. For a major city, such as Houston, to be completely destroyed is a really tough pill to swallow.

We don’t know when or if my daughter’s school will re-open, we don’t know when gas, food, water etc. will be available and most of all, we don’t know if we even have jobs when we return. I guess the main thing we learned from this is that even though we are very possessive of our material things, it’s not what is important. I’m not going to lie. If we go home and looters took all that we have, I will be upset; no devastated. But, once that emotion passes, I will realize that my family is safe and well and that’s what matters most.

If my daughter was older, I would take her with me to Galveston to help with the clean up efforts, but it isn’t safe. But I will have her help me deliver water and food to people near us that aren’t as fortunate as we are. A lesson in humanity and community has humbled us all in Southeast Texas.

If any of you who read or contribute to this blog have family affected by Ike, please know you and they are in our prayers and thoughts.