a different kind of culture shock 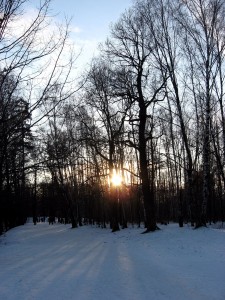 It was early October. We had only recently arrived in Stockholm, but the days were already shorter than in the States. By half past six, the sun was officially gone. And every day sunset came three minutes earlier, not enough to notice right away, but quickly do and you know in 30 days we would lose an hour and a half of daylight.

By the time we “fell back” from Day Light Savings Time, sunset was right about when my kids would wake up from their afternoon nap. My kids would sleep until 3:30 or 4 p.m. and when they woke up, it was dark. Really dark. If you’ve been to Boston or Seattle, you can say you know dark, but this seemed different than anything I’ve experienced. It’s strange to see children walking to school in the dark at 8:30 a.m. and coming home from school at 2:30 p.m. in the same darkness.

Winter in northern countries means a change in lifestyle with, oh, six hours or so of daylight. While my Swedish neighbors would use this opportunity to bake and spend time together as a family, I found it strange to have it pitch dark at 3 p.m., and needed some life around me. I had two young children under the age of two. They were driven by schedule and light helped tell them determine when it was dinner or breakfast time.

We learned to adjust. They would wake up from their naps when other mothers of toddlers back here at home were setting out to do afternoon errands or playdates. I found it difficult to pack up the diaper bag and head out to grocery shop in the dark. But I did my best to reset my internal clock; or perhaps it was my mental clock. Perhaps I should have done the “when in Rome ” thing and retreated inside like the Swedes did, but I didn’t. The kids would wake up from their naps, and to help expose them (and me) to some kind of light, we’d head to the mall. Lots of fluorescent lights do wonders to help establish daylight. Why else do airports create this “hey-it’s-day-time-somewhere” feel at international hubs? We would zip to a grocery store, department store or indoor play area that was fully lit and full of life, even if only for a little while. I soon discovered we were not the only ones going this route. I actually made a few friends with this game. (Side note: I saw first hand why people centuries ago needed a winter solstice celebration in the darkest of dark days. I craved lights for six weeks.)

This was definitely a lesson in learning to adjust to what you are given–a different kind of culture shock for me. It was, perhaps, just an introduction to the next four months of snow that would cover our front yard. You can’t fight Mother Nature. I realized I had to just get in there and do what I could to make darkness fun for all of us. It gave me new appreciation for those who forged this path a century ago without electricity.

The good news is that daylight comes as quickly as it wanes. Once December 21 passes and each day gets lighter, it’s back to 6:30 sunsets sometime in March and a few months later you’re back to round-the-clock daylight. Which I have to say is even weirder than the darkness.