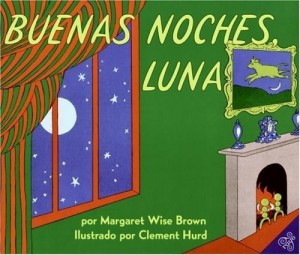 The Banker (my husband) and I are of hispanic decent. Not only were we blessed with our baby, Baby Blue, but also blessed that he is of hispanic decent as well (blue eyes and all). We had always said we would teach our child Spanish. We would NOT take a page from my parents book which was to NOT teach me Spanish, but rather use Spanish as a “secret” language in order to have conversations about Santa and surprise birthday parties. {rolling eyes} The Banker though, having been born close to Mexico grew up only speaking Spanish. It wasn’t until Kindergarten that he actively used English as his language.

Our routine at night has been Bath, Jammies, Story, Bed. So what we have included now is Spanish Board books. They have a wonderful selection of Bilingual traditional stories in all sorts of languages. As a former teacher I know language development starts early and the more reading the better. So I was pleasantly surprised to find such selections as these in Spanish: Blue Hat, Green Had, The Very Hungry Caterpillar, and Quiet/Loud. 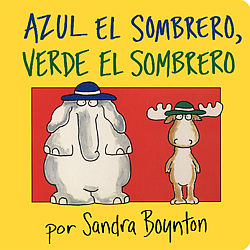 Even for those who don’t speak Spanish, you can purchase a book such as this that has both English and Spanish. Though if they are only in Spanish attempt it anyway! Some stories such as Good Night Moon (Buenas Noches Luna) are an easy Spanish read. Maybe you’ll learn a little yourself!