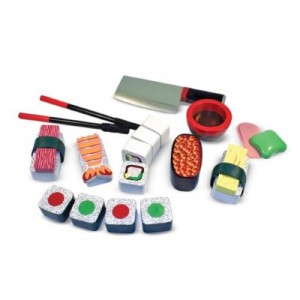 My husband Jeff always swore that our kids would grow up exposed to many different types of cuisine. He was particularly sensitive to this because he has always felt somewhat cheated as a result growing up on bland boring English food. My Mother-in-law dislikes any type of seasoning including garlic. It wasn’t until he was in his twenties that he tried different types of food and hasn’t looked back since (he’s somewhat of a foodie). Since we eat various types of ethnic food regularly there was no question that our daughter Zoe would as well.
As a first birthday gift Zoe received a wooden toy sushi set. It’s an adorable toy. At this time she was just starting to eat finger foods such as peas and o-shaped cereal and wasn’t quite ready for anything quite as large as a piece of sushi. But she quickly became somewhat obsessed with the sushi toy. She’d point to it and say “sushi, sushi” asking us to take it down from the shelf. She loved to try to pick up the sushi pieces with one Velcro chopstick tip attaching itself to the Velcro on the sushi piece. She loved taking apart the sushi pieces and reattaching them to a different piece of rice. She also loved pretending that she was eating it by putting a piece to her mouth and smacking her lips.

A few months later, pregnant with Zoe’s sibling-to-be, I went through a bought of first trimester sickness. The only thing I could eat for a couple of weeks was veggie sushi rolls and I craved them constantly. We made almost daily trips to the café area of Whole Foods for veggie sushi rolls. Many nights the three of us went out to our local Japanese restaurant for “sushi” which again meant avocado rolls for me and Zoe and “real” sushi for Jeff.

Over the course of these two weeks Zoe became obsessed not only with her sushi toy but also with the food itself. Now that I am over that phase we still eat sushi pretty often –partially because Zoe requests it. When I ask her if she wants to eat lunch she asks “sushi?” When she’s playing with her toys and sets the toy people around the little toy table and chairs and I ask “Zoe what are they having for dinner?” the answer is always “sushi.” Since the American Academy of Pediatrics suggests waiting until at least age four to introduce raw fish, for now the only thing in her sushi rolls is avocado or cucumber. However, I hear that in Japan both pregnant women and young children eat raw fish as long as it’s not tuna or other high-mercury types –so maybe we’ll both be eating a spicy scallop roll earlier than I had thought.