a day in dc 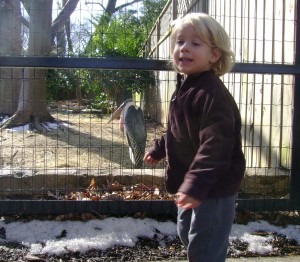 We’ve had such a cold and icy winter in Central Pennsylvania; we jumped at the chance to take a weekend trip to Washington DC to relieve our cabin fever. On Sunday, the temperatures shot up to the 50s and we were within walking distance to the zoo. As we walked leisurely up Connecticut Avenue, joggers ran by with short sleeves and some even had shorts on. I almost expected cherry blossoms to burst out from the trees because it was that kind of day…bright, clear, and shining.

Without a stroller or a backpack, I was forced to walk at Jude’s pace. And even though cars whizzed by and almost everyone we passed was on their Bluetooth walking furiously or running past us, it made me appreciate the pace of a 3 year old. We noticed special rocks. We smelled the delicious foods from other cultures…Thai, Italian, Mexican, Mediterranean. We listened to noises that were unfamiliar to our non-urban ears..honking cars, sirens, helicopters, a street performer greeting passengers exiting the metro with the soothing sounds of classical guitar. Every now and then, Jude would stop and do some sort of yoga move spreading his legs as far apart as he could just to be silly, and we would say, “stretch” together. Mostly, we held hands, strolled along and appreciated each other’s company as the world sped past us.

We arrived at what turned out to be our only destination for the day, The National Zoo. The National Zoo features animals from around the world, and it is a great way to expose children to all the different biomes and unique habitats that exist if world travel isn’t in your budget. Jude asked, “What’s that sound mommy?” Throughout, you could hear the harsh sound of animal caretakers scrapping ice off the animals’ outdoor enclosures. Even though the weather was so nice, many animals were still inside, but we found pleasure in searching for the animals in various exhibits designed to mimic natural habitats from around the world whether they were inside or out. I realized that in order to see if Jude could see what I was pointing out to him, I’d have to squat down to his level. I decided that it was fun to look at the exhibits from his level made a mental note to do that more often in our everyday life. I let Jude chose our path and pace through the zoo. Oddly we spent the most time watching the 2-toed Sloth, who was actually quite active, and never made it to see the lions.

At the end of the afternoon, we sat on a cold granite bench in the metro station watching the red numbers go from 5 to 4 to 3 to 2 to 1. We watched other trains come and go and Jude remarked “Those trains have coaches.” When our train came, we climbed aboard and took our seats. I looked around at the passengers. One older lady with a guitar case was reading the Upper Room. A young African American man wearing a uniform of a security guard nodded off. Two well dressed Asian men conversed in a language that no one around them understood. I looked over at Jude. He had a big smile on his face. He was content to be riding on the train.

I remembered what that was like as a kid….to be happy doing just what you are doing. I was glad that I didn’t try to stick to my original plan for the day which included a trip to Chinatown and the National Building Museum. I was thinking of my normal pace when I thought we could do all that. Although, it was a shame that we didn’t get to see the Chinese Dragon in the Chinese New Year parade, I was content knowing we had enjoyed the day at a pace that allowed us to be fully present, aware, and admiring of the diversity of all the life around us.