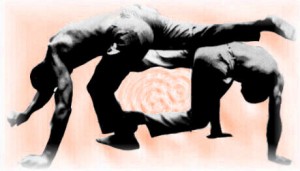 *This is actually written by my husband, David. Capoeira is one of his great loves.

One of the most amazing imports from Brazil to the U.S. in recent years has been capoeira, an athletic game that is part sport, part dance and part martial art. Capoeira academies are springing up in most major cities, and offer a fascinating glimpse of Brazilian history, music, and culture, while at the same time providing a fun way to get in shape and also learn self-defense.

Capoeira is “played” when two people enter a circle of on-lookers, and engage in an unchoreographed dialogue of movements. As the circle sings in Portuguese, and plays traditional instruments, the two players move to the rhythms in a fluid interaction of kicks, swaying torsos, and amazing acrobatics. At times the music is slow, and the game is playful and low to the ground, at other times the music accelerates and the interaction becomes more martial and can appear quite dangerous, although in fact movements are exquisitely controlled and violence is not the goal.

Capoeira was developed by African slaves in Brazil, and may have some of its origins in African traditions. The way that martial elements are concealed as a dance may also reflect the conditions under which the slaves trained for self-defense.

How does one “win” a capoeira game? On the one hand, the game is played for the sake of beauty, and also communication, just as two ballroom dancers communicate with each other in a conversation of subtle and dramatic movements. On the other hand, capoeira introduces an element of treachery in the midst of the dance; players are looking for a chance to tug at a supporting leg with one of many different techniques, so that the other player lands sitting on the ground. The most important rule in capoeira is to avoid sitting, and avoid having the other player sweep your legs. A well-executed leg sweep is perfectly timed, so that someone lands softly. Both players, and the crowd, recognize the skill of the player who is successful in sweeping the other. Mastery can also be demonstrated by complicated acrobatics, or by catching the other player with a kick; it is good form to pull the kick at the last moment to avoid hurting the other player, and good form for the other player to acknowledge being caught.

Capoeira is also an ideal activity for children. Many academies have special children’s classes, for children as young as five years. The combination of music, athletics, and culture is sure to be a blast for little ones. If they can play, then they are ready to start playing capoeira.