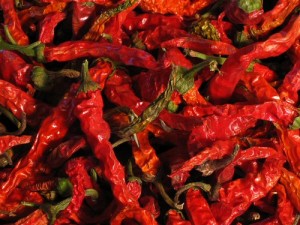 My 19-month-old daughter Zoe likes a broad range of different cuisines including sushi, Indian, Mexican and Thai food to name a few, yet she does not like anything spicy.  My friend’s daughter who is about the same age loves anything spicy –she eats about half a container of Whole Foods guacamole at a sitting.  This same guacamole at first taste made my avocado-loving daughter cry and scream “mouth, mouth, juice please!”  My friend attributes her daughter’s love of spice to the fact that she herself ate spicy food while she was pregnant and while she was nursing her daughter.  But it would be difficult to find someone who ate more spicy food when pregnant or nursing than I did (I was known for putting very hot Vietnamese chili sauce on much of what I ate while pregnant).  Yet my daughter does not like spicy food.  The other day I gave her a fairly mild samosa and she took one bite and said “this too spicy for Zoe.  No eating.”
I know from my time living in India that babies and young children are usually fed a mild version of the food that their parents eat –made with all of the spices minus the chili powder (by taking out the child’s portion earlier in the cooking, before the chilies have been added).  In other parts of Asia I’ve seen families eat non-spicy food but add chilies to their own serving as desired.  This way the small children can eat the same food without it being spicy.  Then, as the children get older they can add spice little by little.  I assume that in other countries where the food tends to be spicy they also have a way of making a mild version for little kids to ease them into eating spicy food, but I don’t know this for sure.  Apparently different kids accept spiciness at different times –some by a year old are eating what their parents eat while for others it takes until they are 8 or 9.  In any event I’ve never heard of anyone raised on spicy food who does not like it as an adult, so all children who grow up with spicy food eventually learn to love it.