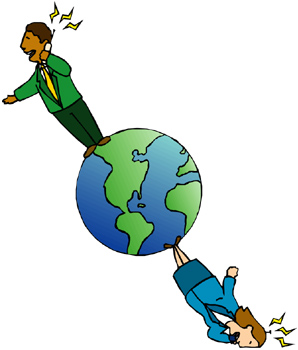 What India has already taught me [a.k.a what I’ve learned during this move to Delhi, and how it relates to marriage as I know it … a SAHM with two littles and a big kid at home, with a very hard-working husband] :

Let’s face it and be honest … when one spouse is working and the other is at home with the kids, there never really is a “good” time to talk during the day. Truthfully, even when evening approaches, time doesn’t magically make itself available either. Even more damaging to efforts at communication is a 9.5 hour time difference.

I’ve learned that in order for communication to happen, and actually flourish, both parties have to MAKE TIME. You don’t necessarily have to make time … at the same time. But the effort does need to be made.

When you phone your husband, understand that he might not be able to make the time right at that moment. He may be in the middle of changing oil, performing a root canal, negotiating a contract or in the middle of a therapy session (or whatever it is your hubby does). You don’t have any control over how his day progresses or entails, no matter how pressing YOUR issue happens to be.

What you DO have control over though, is making time when HE calls YOU to carve out even 5 minutes to concentrate your energy on listening to what he has to say.

Yes, I know. You might be in the middle of making lunch, homework or refereeing an argument. Even more disconcerting, you may be in the process of herding your children out to the car for an outing. You may have just hung up from an hour on the phone with your electric company arguing about a bill or just finished speaking with a teacher about a behavior issue. There’s also a huge possibility that when he calls that you’re in the middle of a diaper change, cleaning up vomit from one of your pets or knee deep in laundry.

Whatever you are doing, make the conscious effort — if you can — to STOP what you’re doing … and listen. I am still working on learning how to effectively verbalize to Todd that sometimes I really can’t devote any time to a phone conversation (because of circumstances on my end of the phone) … and there are some times when he WISHES I’d just not answered the phone (when the kids are screaming banshees!).

I need to make more of an effort to explain quickly that I will be able to talk … after I finish changing a diaper, or get the kids loaded up in the car. Then I’ve effectively communicated where I’m at in my day and we can hopefully have a good conversation, maybe just a bit later in the day.

Another thing we have learned and put in place – actually long before India came about — is a “two ring system.” If I call him during the day at work and he doesn’t answer, we have put a system into place whereby I call again right away. If I’ve “rung twice,” it means that I need him to call me back ASAP, step out of a meeting, or otherwise make himself available to me.

The conversation that happens in those five minutes can either be positive or negative. Might as well give it a go to ensure that they are positive!

What tips and tricks do you have for making time in your marriages and relationships?