Rock Out to Dara Puspita!

We’ve said it once, and we’ll say it again, Bali Rocks! This little island known for its music was also home to one of the most famous rock bands you’ve never heard of, Dara Puspita. 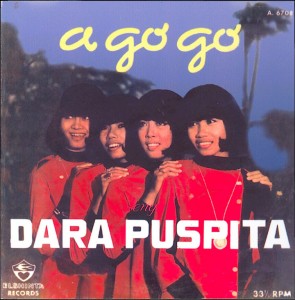 Dara Puspita defied the norm by being the first all-female rock band who could both sing and play instruments all the while putting on wild stage shows. (We told you, Bali Rocks!!!) The band first formed in 1964 and continued occupying radio waves until 1972 when they played their last show. Dara Puspita revolutionized both music and culture in Bali, taking inspiration from both The Beatles and The Rolling Stones, whose music was banned in Indonesia at the time. In a country overtaken by the music culture, in 2007 Dara Puspita was featured as #20 in the Indonesia Rolling Stones list of the top 150 Indonesian greatest albums of all time with their hit record Jang Pertama– quite a feat!

These ladies created some go-go inspired jams that will surely ignite your inner wild child.  Rock-out with your family and play some of Dara Puspita’s greatest hits for free here: https://bit.ly/xKlNwo. These tunes are perfect for inspiring some arts and crafts, or better yet, listen to them when coloring Tea’s cultural activity printouts. Though, we will warn you, with these head-banging jams coloring time could easily turn into a dance party!

What’s your take? Will you and your family be listening to Dara Puspita?