Conversations With Filmmakers + Enter to Win!

The New York International Children’s Film Festival is an annual Oscar-qualifying event that seeks to “promote intelligent, passionate, provocative cinematic works for ages 3-18 and help define a more compelling film for kids.” Each year the festival presents 100 animated, live action and experimental shorts and features from around the world. Since 2000, all screenings have sold out in advance and we’re giving you the chance to win 4 tickets to the opening and closing nights in New York City + 6 DVDs of past films. Scroll down to enter!

Exclusive for Tea Collection fans: use the code TEA14 when ordering online to receive $2 each ticket!

We were lucky enough to hear from two filmmakers who will be part of this year’s festival. Anina is a film by Alfredo Soderguit out of Uruguay featuring a bright ruddy red haired little girl. Rabbit and Deer is a short out of Hungary by Peter Vacz. This animation features a rabbit and a deer living in a 2D world, until one day everything changes. 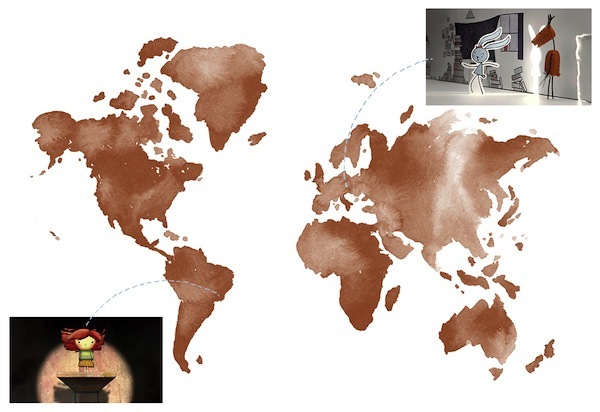 Tea: When did you know you wanted to be in the film industry?

Peter Vacz: Quite late actually… I was 19 when I started to study animation. Before that I wasn’t really into filmmaking. As a child my first real passion was playing the cello, which I still do. In secondary school I studied graphic design but in the meantime I also tried out many other things like sewing clothes, making street art, design objects and I was interested in doing animation. I continued my graphic design studies at the Moholy-Nagy University of Art and Design but less inspired. In my second year I designed a puppet with a set for an animated film idea. It made me very excited and I realized that animation and storytelling is the combination of all the things I love doing. I immediately changed to the Faculty of Animation and fell in love with it. It is a magical profession.

T: What was the inspiration behind this project?

PV: I tried to make a personal film that people can relate to and I hoped that it’ll give a unique experience to the audiences. The strongest inspiration a previous love relationship, with all the good experiences and hard times that we shared together. The other thing that really inspired me was the magic of exploring storytelling through different animation techniques… or maybe the other way around.

T: If children take only one message away from this film, what would you like the lesson to be?

PV: Sometimes we change and drift apart from the people who we love, and then sometimes we can become very different people but still remain fundamentally close to the ones we love.

Either way the essence remains the same; we should try to care more about the people around us, because the little things that we experience in relationships are what makes life to live for.

T: Do you have any advice for kids who want to be filmmakers?

PV: Be passionate. Once you have a passion for something you should listen carefully to the people who inspire you because you might learn some great things from them – but don’t be afraid to express your own thoughts in the meantime. We are all unique and even though we do similar things in life we’ll always experince them differently from the others. I believe that the uniqueness is not in the subject you talk about, but the way you talk about it. (As the quote says: ‘the devil is in the detail’.)

T: What film do you remember most from your childhood?

PV: As a child I’ve seen some great Hungarian animated films like The Little Fox (Vuk, 1981) by Attila Dargay and the Cat City (Macskafogó, 1986) by Béla Ternovszky. But my first biggest cinema experience was The Lion King. I was 6 years old and I remember crying over the dramatic death of Mufasa. I was really hooked by the characters and their story. I still think it’s one of the most brilliant films.

Tea:  When did you know you wanted to be in the film industry?

Alfredo Soderguit: I use to illustrate books and work as an art director and production designer. Just because I love to draw, paint, build, love to see films and love good stories. I like to do my work as a representation of my own feelings and thoughts. Then I found a beautiful story and just wanted to make a movie.

T: What was the inspiration behind this project?

AS: The book talks about very deep and important things. It is very humanistic, not only the contents but the way to tell the story. You can feel the characters as real people. Any time I read the book it is like a trip direct to my own childhood, the questions, the sensations, and the way to feel the world around you as a big mystery.

T: If children take only one message away from this film, what would you like the lesson to be?

AS: I don´t want to spread any specific lesson, but I think that the most important is something like: Be ready to learn in freedom, learn about friendship, be brave and face every kind of fear. Don´t let anyone scare you and refuse any kind of authoritarianism.

T: Do you have any advice for kids who want to be filmmakers?

AS: Be open to see different kind of films (beauty can be found anywhere), look for those that represent your feelings, learn the language and tell your story in a free and creative way.

T: What film do you remember most from your childhood?

AS: “Neverending story” and later “Labyrinth”. I love films with real physical puppets.