Across the Street Discovery and Exploration Our Destinations Share Your City

Share Your City: A Day in Canton, OH with Elizabeth Jacob

At Tea, we believe in the transformative power of travel and connection. Every time we experience a new place, we gain new perspective about the world, and ourselves. But cultural discoveries don’t just happen abroad… you can find them just down the road. We’ve asked Tea families across the US to show us around their hometowns and share some of the incredible places that set them apart.

Next on our Share Your City tour, we spend a day in Canton, Ohio with Elizabeth Jacob and her daughter Jessica. Follow along they give us the inside scoop on the best things to see and do in their charming city.

I have traveled throughout eastern Europe, I have visited Canada, explored Mexico and adventured from coast to coast in the United States. But for me, Canton, Ohio will always be home. This quaint city, located just one hour south of Cleveland, is full of hidden gems and history.

The city of downtown Canton has seen growth and revitalization over the past decade and is rich in the arts, restaurants, retail and entertainment. It provides residents with several benefits of big-city living, yet maintains the charm of a medium-sized Midwestern town. Come along with us on a city tour guide of Canton, Ohio!

The Canton Museum of Art
The Canton Museum of Art (CMA) is a major force in the cultural and intellectual aspect of our city, and through its education and leadership, this museum is a staple in assuring our downtown remains a dynamic center for the arts community. The Museum’s permanent collection features 19th, 20th and 21st century American works on canvas and paper, with a focus on watercolors and American ceramics from the 1950s forward. Numerous studio art classes and workshops are offered to children, teens and adults throughout the year.

Bender’s Tavern
Bender’s Tavern is another unique and historical spot you won’t want to miss! This upscale casual dining establishment first opened its doors in 1902 and has been serving good food ever since. Bender is best known for its fresh fish, historical ambiance and grand wine cellar.

Milk & Honey
Milk & Honey, a popular ice cream parlor, has been serving Canton for over fifty years! This old-school, family-owned business will take you back in time with their classic diner fare, ice cream sundaes, sodas and candy. 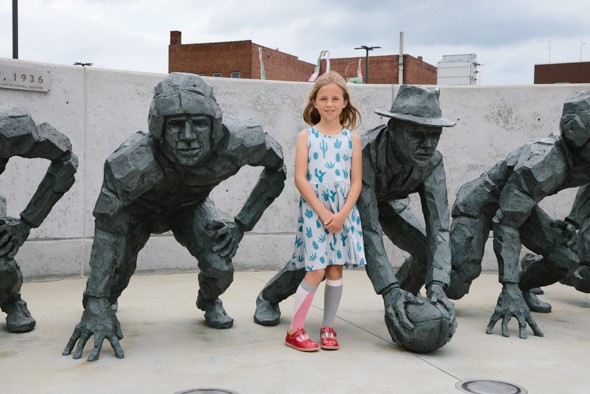 Through this small journey of our town, you are able to see that Canton, Ohio has much to offer in the world of history, fine food, cultural experiences and the arts. If you are ever passing through, make sure to stop and check out one of these landmarks.

To keep up with what’s new in Canton, follow the daily adventures of Elizabeth and fam, here.