Our first  Foreign Correspondent is here! Bijal Shah, her husband, and her two daughters spent ten days traveling around France this summer. We outfitted them with a suitcase full of Tea before they left, asking them to share their adventures with us upon their return. Below is Part 2 of their adventure. Stay tuned for the rest of their story this week.

Our surroundings in France were incredible.  The most amazing moment we had, the one that made both of my daughters’ jaws drop, was seeing the Eiffel Tower change from a lit up tower to a sparkling beauty.  We knew that it would light up at night but all of a sudden, while we were on our night boat cruise it began to sparkle and continued to sparkle for five minutes. This was their single most memorable moment. 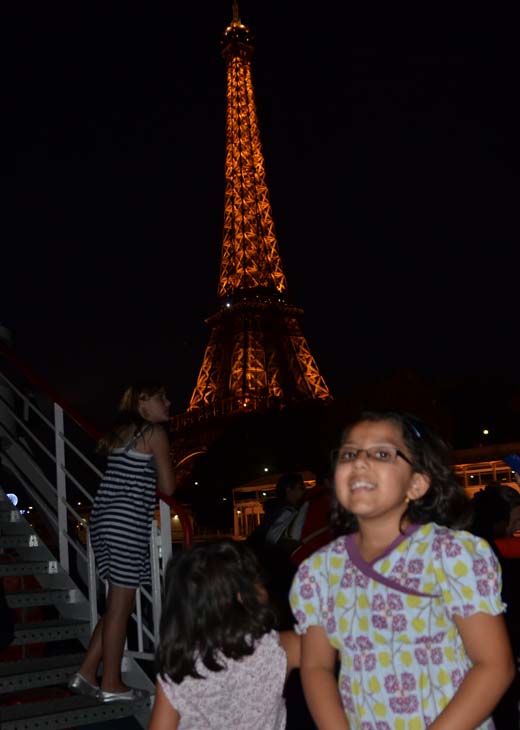 Right outside our hotel was the beautiful and peaceful Tuileries Garden.  This garden was our direct path to the Louvre, which held the Mona Lisa, my older daughter’s favorite painting.  At the Louvre, my daughters used their sense of sight to match the famous paintings they were seeing with the ones on their Louvre Bingo card that I had created at home, with the pictures of the most famous pieces of artwork at the museum.  The bingo game was perfect for keeping their attention (at least an hour) at the museum.  On our third day in Paris, we headed to Versailles to see the Sun King’s palace.  Here we once again used our sense of sight to count the number of sun symbols we saw in each room that we visited…another tactic to keep the girls excited and looking around at the beautiful decor in the heat and crowd of people. The favorite room for both girls was the Queen’s bedroom with the pink and flowery motif and total number of symbols counted was over 100.

After Paris we headed to Provence, where we had rented a car and were able to tour on our own.  We drove to a 12th century working abbey called Senanque Abbey that was located in a valley outside of the hilltop village of Gordes.  It is impossible to put in words how beautiful the ancient Abbey looked surrounded by the hills and purple lavender fields.

On a whim, we decided to drive to the town of Lourmarin where we happened to come across an old chateau that was open to tours.  The Chateau de Lourmarin was a beautifully restored chateau from the 15th century with amazing views.  The restored kitchen inside the chateau was the favorite all around.

The next day we drove to the French Riviera coast. As we approached the coast we caught glimpses of the sapphire blue waters peaking out in between the hills. We drove to a picturesque coastal town called Sanary-sur-Mer.  It had a marina full of sailboats and a little boardwalk with cute shops and cafes. We were even able to take a dip in the ocean at a nearby beach.  All of the natural beauty in Provence was a stark contrast to the metropolitan beauty of Paris, but both were a feast for the eyes.