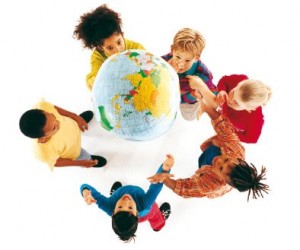 After a trip to the local ice cream parlor one evening recently, our neighbors stopped by our house to share some ice cream sandwiches with us. Their oldest daughter Lila is in first grade, and their youngest Janie is in our son’s preschool class. The children immediately started playing together, and the adults got to talking. As it is the fall, the conversation turned to the new school year.

Lila is enrolled at a nearby international school, where she is studying French and seems to enjoy it. I asked the girls’ mother if she plans to enroll Janie at the same school as her sister when she is ready for kindergarten. She said yes, and that’s when she explained that the school has two immersion programs: French and Mandarin. “How did you choose French over Mandarin?” I asked her. Her answer was as interesting as it was thought-provoking.

“Well, we were initially most intrigued by Mandarin,” she said. “But when we visited the school, we experienced this very strict, regimented approach even with the little ones. There was a lot of pointing and direction, ‘you sit there! You sit over there! Ok, now we are going to count to ten!’ The French program, while academic, wasn’t nearly so structured. Also, both of us [pointing to her husband] speak French, so we felt we could help Lila if she ran into anything she didn’t understand. But with Mandarin, we’d be as lost as her. We felt that it was enough of a culture shock to enroll her in an immersion program, but then to offer no safety net at home seemed too much to ask of a 5 year old.”

All of that made sense to me, and frankly I could relate, since both my husband and I studied French too. My elementary school also introduced a foreign language in kindergarten (French), but it was a 30-minute class, certainly nothing close to an immersion program. That same school is now on our short list for when our son is ready for school. But, as their family said good-night and we thanked them for the ice cream, I was feeling ambivalent. How did I really feel about language immersion for our son?

On the one hand, I am definitely in favor of having him study a foreign language starting at an early age. My husband and I would certainly prefer a school that offered a class as part of the curriculum to one that didn’t. But somehow immersion feels a little bit “hard core.” How would we have felt about it when we were kids?

Currently, our son attends a play-based preschool that we love, but some might call it a little bit “crunchy.” Kids can’t run around naked…but almost. There is an organic garden growing in the play yard, which the children water and maintain. The philosophy of the school is one of enabling children, who are viewed as capable, competent, self-motivated learners. When my friend and neighbor mentioned culture shock, I wondered how our son would manage a transition from “crunchy” to “foreign.”

One reasonable answer is that starting a new school can be challenging for any child, and if we choose immersion or not, our son won’t know anything different. Choosing immersion, however, is not without its drawbacks. There is research (academic and anecdotal) to suggest that immersion programs often slow down children’s English language advancement. My friend and neighbor said herself that Lila’s rate of mastery of English vocabulary slowed measurably in her first year at the international school. After that initial year or so, though, I found very little to suggest that there are any long-term drawbacks to being bilingual. Quite the contrary, which of course largely explains the draw and why the waiting lists for public and private immersion programs in the Bay Area are as long as they are.

However, my husband and I do have a secret, nagging fear that if our son was so focused on learning a new language that he might not be able to devote equal attention to reading, math, science, etc. Will the immersion program be so all-consuming that other disciplines will get short-shrift?

So, really it comes down to our motivations as parents for considering such a track for our son. Is it to give him an advantage that other children might not have? Maybe, a little, sure. Is it to expose him and his brain to another way of thinking, speaking, conjugating, communicating and expressing himself? Absolutely. But, assuming the immersion program doesn’t shine in all subjects, is it worth it? And if we decide that it is, are we as parents prepared to pick up the slack at home? I’m glad our son still has a little time, because I haven’t made up my mind just yet.