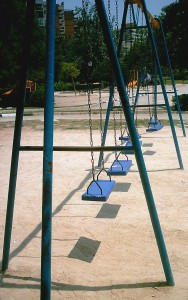 Every day after naptime, my two-year-old and I made the short trek to the local spielplatz (playground). It was a popular time of day for the toddler set. As soon as the castle-like climbing structure came into view, we could see other kids running amok, their mothers holding court at one of the many picnic tables. One particular group of Moms was a constant, a Queen-Bee-type clique led by one of those tall, blonde, perfectly-put-together German mothers. She and I never exchanged more than a “Guten Tag,” my obvious American-ness making me feel too conspicuous to say more.

My son, Chet, had no problem ingratiating himself with the local children. Despite the language barrier, as soon as we stepped foot on the playground’s gravel, he’d find himself surrounded by other children, sharing their toys and games. But me? Despite my fledgling German, I always seemed to be on the outside looking in. The lone outsider.

Until the day after Fasching, the German equivalent of Mardi Gras.

On that day, as we approached the playground, I saw Mrs. Lead-Queen-Bee standing near the swings, holding her small daughter at bay. Once near, we saw the problem. Fasching’s partygoers had visited the playground the night before and left behind a mess of broken glass and party favors. Worse, they had done mischief, throwing dirt and water all over the slide and swinging the swings up out of reach. The other regulars must have seen the mess and turned tail back home. But Mrs. Lead-Queen-Bee and I had two children who would not be dissuaded. They wanted to swing.

What else could two mothers do? We cleaned up the glass as best as we could. But that didn’t solve the swing problem. Mrs. Lead-Queen-Bee handed me her daughter and then tried to jump up and dislodge it. But even at nearly 6 feet tall, she couldn’t quite reach. So instead, she turned to me and asked a question.

At first, I couldn’t quite make out what she wanted. At just over 5 feet, I had no shot of knocking it down on my own. What could she be asking? I looked at her quizzically and said, “Wie bitte?” She repeated the question, this time with hand motions. She wanted me to climb on to her shoulders. She said we’d have more luck zusammen (together).

Our children laughed at the sight of me climbing on to her shoulders. But that laughter soon changed to cheering as, together, we got both swings around and down.

As we spent the afternoon pushing our kids on the swings, listening to their attempts at communication. Going by their example, Mrs. Lead-Queen-Bee and I started our own talking. There were a lot of words we couldn’t explain around, a fair amount of topics shut down with a shrug and confused look. But we kept trying.

And the next day after nap time, Mrs. Lead-Queen-Bee waved me over to her table and introduced me to as her Amerikanische Freund (American Friend). I was never on the outside again.