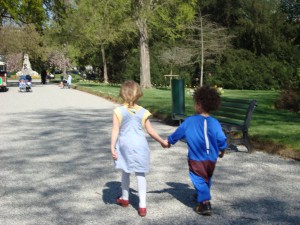 As the sun comes out more, I find myself graviting to a very special old friend; “The Park”. Since I was going to be alone with my two youngest boys, while my husband and older son went to California for two weeks, getting out of the house was the top priority for me. Two hours after we said our farewells, I found myself full of energy preparing for the day ahead at the park.

I have to admit that it was hard making my way to the park. I contemplated stopping at a cafe or taking the boys out for pizza but I kept my goal in mind. Fifteen minutes later we arrived a the very beautiful Jardin des Plantes in Toulouse! I felt like I was in a French film. Families were out on the grass having picnics, little children were playing soccer on the grass and vendors were selling every sweet treat your heart could desire. It was like a carnival for the young at heart! The boys dove right into the fun by heading to the play structure. They seemed quite caught up in the whimsical nature of it all.

As I was sitting nursing my youngest son, I noticed my two year old had made friends with a little girl. They had decided going down the slide backwards was a wonderful idea. They gave it a go about ten more times! When I looked up again he was having a cracker with the girl and her family. They were sitting on a bench not to far away from mine. I thought: that is strange normally he is so shy with strangers mainly due to the language barriers he faces in France.

As I approached the bench to make sure he was not “wearing out his welcome”, I noticed the couple was speaking English to him. As it turned out, the mother is from Seattle and her husband is French. They will be staying in Toulouse for awhile! She was just as happy as I was to meet another family from the States. We quickly exchanged number with promises to have a string of play dates during the spring and summer. I was so happy for myself and my children that we were able to make this great connection at the park. We spent two more hours there hanging out with the our new friends and having a good time. Before leaving I bought the boys a soccer ball made in Italy for 2 euros 50. It has earned the role as the sixth member of the family. What a bargain!

Our day at the park helped me discover that no matter what continent you are living on, “The Park” is a glorious refuge for families!