everyone needs a little aloha 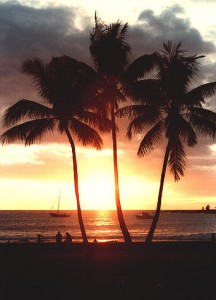 There is an actual law encoded in the Hawaii Revised Statutes, section 5-7.5. It acknowledges Aloha Spirit as “the working philosophy of native Hawaiians and is presented as a gift to the people of Hawaii.” According to the law, The Aloha Spirit is the coordination of mind and heart within each person. Each person must think and emote good feelings to others. Character should express the charm, warmth and sincerity of Hawaii’s native people. Aloha spirit is thought of as a mutual regard, affection and an extension of warmth in caring with no obligation in return.

Although these definitions come from “the law books” I am confident Hawaiians do not spend much conscious thought on Aloha Spirit or it’s definition. It is just there within them.

Picking a name for our baby was easy for us … until we found out it was a girl. We both loved the name Drake for a boy. The main reason was our good friend and one of the nicest guys we know is named Drake. The other reason was that he is Hawaiian and we hoped one day our child would ask about his namesake. We would be able to tell him it was because we love Uncle Drake, he has Aloha Spirit and please go learn what Aloha spirit is all about. When we asked our friend Drake if we could name our baby after him, he happily said yes and asked the due date. “June 21st,” we told him. He shocked us by saying June 21st was also his birthday. That was it, divine intervention, we were certain it was now a boy. It had to be.

Both my husband and I have been heavily involved in athletics all our lives and we immediately began daydreaming of the cushy retirement package rewarded to the loving, supportive parents of a professional baseball player.

Three months later I had my ultrasound. We would finally get to have our suspicions confirmed regarding the sex of our new baby boy. The doctor’s office split my appointment that day so that I was to have a procedure, a lunch break and then the ultrasound. During our lunch break I insisted we eat at Top Dog, a hot dog stand in Berkeley … just to seal the deal. Sadly, it was not open. Not a big deal, I don’t even like meat by-products and I was just taking one for the team. An insurance policy. After passing the closed sign we switched up our plans and ate at Shen Hua, delicious Chinese food. At 1:30 pm we excitedly returned to the doctor’s office to find out the good news.

The doctor squirted the freezing cold ultrasound goo on my basketball-sized belly…hey, maybe a professional basketball player. The doctor circled the wand around and around and then exclaimed, “IT’S A GIRL!” I turned to my husband and said “I told you we should have eaten lunch at Top Dog. We ate at Shen Hua and you know what a fortune cookie looks like!” It was just a joke between my husband and I but as a resultant the doctor could no longer look me in the eye and felt personally obligated to softly mutter “well, I have both a boy and 2 girls and I can assure you they are both wonderful.”

When we returned home it was a struggle to find a girl’s name. We ultimately decided on Olivia. I lobbied for not giving her a middle name, deeming it really not necessary. My husband was adamant about having a middle name. In his words, “you have to give your child a middle name, it is Industry Standard.” It was also my husband who came up with the idea of using Drake’s last name, Parker. Really? Could we name our daughter with someone else’s last name? Isn’t that supposed to be the mother’s maiden name? And what does “Industry Standard” say about that? It all seemed a little stalker-ish to me. However, at that time Parker was listing in the popular girls names so that took away the stalker feeling I was having. In addition, it would sound beautifully professional should she have to use her full name such as a lawyer or CFO. Above all and most importantly, Olivia can still one day ask why she was named after a large Offensive Lineman and we will send her in search of Aloha spirit.

Ironically enough, I think most if not all who have met Olivia Parker Chaplin in the last 5-1/2 years would say she has already found it.