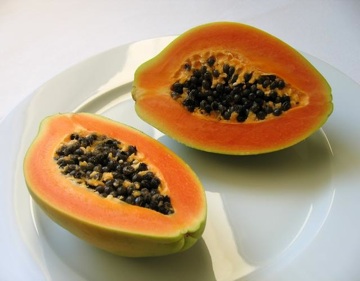 I recently posted some homemade popsicle recipes, but here are some more things you can make at home.

Sometimes when we are short on time, and it’s a really, really hot day, we just freeze some fruit in a container. I cut grapes in half and freeze them. I used to eat grapes like these growing up and my son also loves them. We also freeze small watermelon chunks. (Just make sure they are small enough — and you can thaw them out a little before giving them to your kid — to avoid choking hazards).

Another idea is just to freeze some juice. Lately my son has been asking for bing-bing (his short phrase for ice cream) all the time, so we try to think of cold things that are not ice cream. One time we just put a little bit of juice in a cup and put it in the freezer, and then gave it to him with a spoon. It entertained him for a good 15-20 minutes. None of these treats are great in terms of nutrition, since it seems to take longer to eat frozen vs. regular fruit, but it is fun on a hot day.

We’ve also been making a lot of smoothies. Smoothies are easy because you can basically put anything in them, including greens. If your kid is like mine and picks out the teeniest piece of green onion from his noodles, fried rice, etc., then this is a good way to get to green leafy vegetables in his diet. We followed a smoothie recipe that includes apples, bananas, grapes, yogurt and spinach and you can’t really taste the spinach at all! (There are many “green smoothie” recipes online).

But my favorite smoothie of all is papaya milk smoothie, or papaya milk. I drank a lot of this growing up, especially during the summers in Taiwan. It’s a very popular drink, very easy to make at home, and yummy.

1 cut up papaya (cut in half, scoop out seeds with spoon, and scoop out the “meat” inside)

¼ cup sugar water (heat up 1 cup water and sprinkle a generous amount of sugar in it; stir until sugar melts, then cool. You can save the rest for later use.)

Put everything in a blender and drink right away.

My son and I both like this drink a lot. You can prepare the papaya ahead of time if you want, by scooping out the meat and putting it in a container in the fridge. We buy the papayas in Chinatown or other Asian supermarkets because they are usually cheaper there (and according to the Environmental Working Group, papayas are among the fruits and veggies considered “consistently clean,” or low/lacking in pesticides).

My son doesn’t eat papaya by itself, I think because it has a pretty strong, distinct smell (I used to think it smelled like feet). But with milk and some sugar, it tastes divine. Did anyone else grow up drinking papaya milk? What are some other hot weather recipes?