A Gift from Gaonli Village

I’m not sure what I was expecting, really.

Perhaps small groups of girls quietly sewing or studying or shyly showing us their homemade handicrafts. Something simple. Something that would be easy to describe with a few well-chosen adjectives.

Instead, I found myself holding a bemused baby goat and thanking a smiling 14-year-old girl for her gift while trying to explain through a translator that there was no way I could get a goat through customs.

It was a Saturday in Jaipur and my Tea colleague Jessie and I were spending the day visiting villages with Gram Bharati Samiti, a non-profit funded by the Global Fund for Children. In Hindi, the name means “Society for Rural Development.”

Early that morning, we met the Gram Bharati Samiti founder, Bhawani, at his office near Amer Fort. A sixty-something man with sharp eyes and sparse hair, Bhawani welcomed us with a gentle greeting and masala chai. He introduced us to Kusum, a quiet woman in her fifties who has worked with Bhawani for 25 years. (Kusum has one of those smiles that makes you feel like everything is going to be ok.)

Bhawani explained that he and Kusum would take us to visit three of the 17 villages they’ve been working with—teaching them about safe drinking water, about healthcare and women’s rights and the power of education.

After an hour or more of jouncing down increasingly narrow roads, dodging cows, camels and overloaded motorbikes, our van pulled into the middle of Gaonli village and I sat and stared in open-mouthed astonishment.

There, in a dusty clearing between equally dusty mud dwellings, stood a huge tent teetering on bamboo poles. And beneath it, a rainbow of pink and yellow and purple saris. 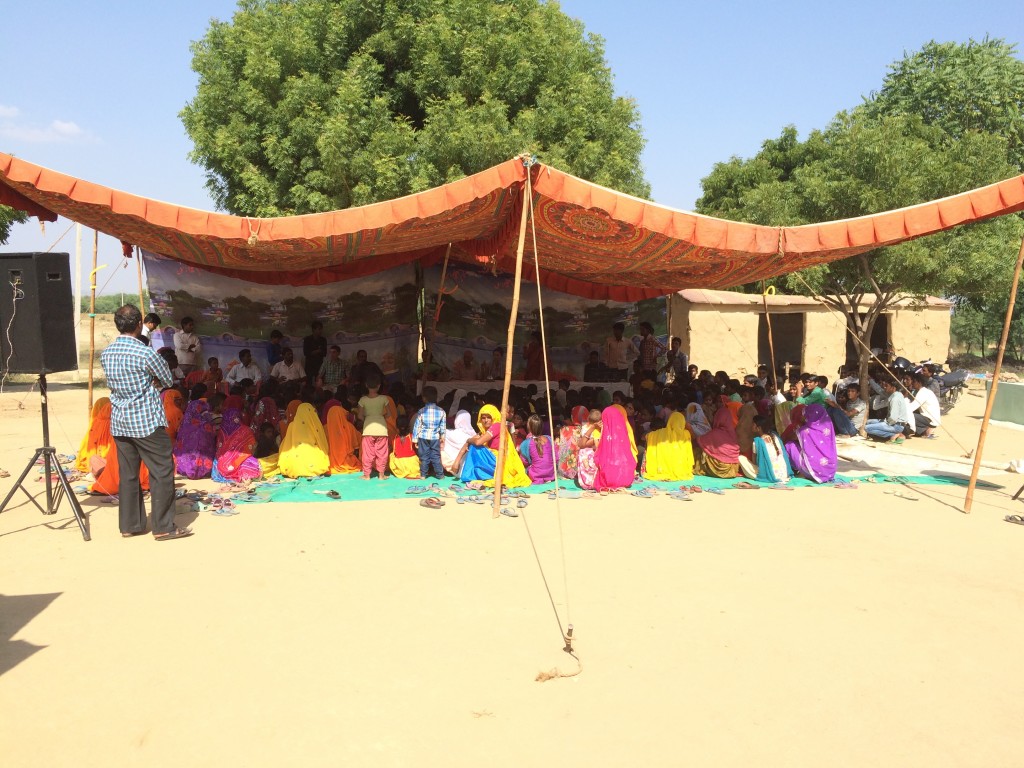 A crowd of villagers, mostly women and girls, all turned to stare as we awkwardly climbed out of the van and then, as Jessie and I pressed our palms together and murmured, “Namaste. Namaste,” they all began to smile and laugh and bob their heads in greeting. They had been waiting for us.

We were led to the front of the tent and seated on folding chairs facing everyone as Sarita, another GBS staff member, picked up a microphone and began to introduce us.

We found out later that the sound system was powered by a generator that had been trucked in on the back of a motorcycle. Gaonli has no electricity or running water. The people who live there walk nearly two miles each morning to pump their water from a well. (Yet later, at every door we passed, someone came out to greet us holding dripping glasses of water for our refreshment.)

Dressed in their best and visibly nervous, several teenage girls put on a Rajasthani dance demonstration, one after another after another gracefully bobbing and twirling in front of us, anklets jingling. I kept staring out at the crowd, my eyes catching on a 6-year-old girl named Puja in the front row. Every time I looked at her, she was staring at me. And as soon as our eyes met, she would giggle and duck her head. It became a game. We couldn’t stop grinning at each other. Bhawani explained that 4 years ago, before GBS came to Gaonli, most of the girls here were married off at a very young age. But now, all that has changed.

There is no school in the village, and parents don’t allow their daughters to travel far from the safety of home. But Sarita and Kusum and Bhawani and other GBS workers have taught the women and girls in this village to know their rights—their right to education, to employment, to safety, to healthcare.

“It is all about women empowerment,” Bhawani tells us later. “We teach the women they can do it themselves, they don’t have to depend on the men. Developing confidence in women makes all the difference.”

He said that when the girls see women like Sarita, like Kusum—even like Jessie and I—who are educated and independent, they begin to think, “If she can do it, I can too.” Which explains why several of the girls, when given the opportunity to ask Jessie and I questions, want to know how much schooling we’ve had and what our jobs are.

In the tent, Bhawani asks the girls to raise their hands if they are married. Only a few of the oldest girls, those over 18, raise their hands. Then he asks how many of the girls go to school. Almost every hand shoots proudly into the air, Puja’s among them. GBS has taught the girls valuable skills—sewing intricate fitted blouses that are worn under saris, weaving dhurrie rugs, embroidering saris. Now the girls earn their own money, and with that money comes a measure of power, of freedom to make their own choices.

We are taken on a tour of the girls’ work areas. They are eager to show us their skills, fingers flying over the carpet weaving loom.

One of the older girls, Priyanka, puts the finishing touches on a purple and gold blouse as we watch. Kusum holds up the finished blouse so we can photograph it and calls Priyanka a “master tailor.” Priyanka blushes, but her smile is full of pride. There is just time for photographs before we leave. The girls crowd around us, trying on my sunglasses, feeling the fabric of my skirt, touching our hair, laughing and chattering. Jessie and I are bewildered celebrities. We weren’t expecting this—this exuberance, this outpouring of joy. We want to stay in Gaonli all day.

But Sarita and Kusum and Bhawani herd us into the van and we’re off. There’s so much more for us to see. We stop by an ancient step well that GBS has restored, cleaning and repairing it and painting the yellow walls with beautiful murals. It provides not only precious clean water but also a place for the community to gather.

We visit Khawarani village where Sunita (19), Mamta (15), Sonam (13) and Ravina (15) are seated at four corners of a sari, embroidering incredibly intricate details with beads and silver thread. We stop for lunch (home-cooked by Sarita) at a GBS field office and then go on to Bhanpur, a larger village where we meet a group of women who are entrepreneurs. Thanks to micro-loans from GBS, they each have purchased a buffalo and are now the local milk ladies, earning 5,000 rupees ($81) per buffalo per month.

The women tell us that because of GBS, they have learned to speak for themselves, to make connection. They have repaid the loans from GBS and now spend the money for their own families—one of the women used her milk money to send her husband to college. The sun is sinking fast by the time we head back to Jaipur. It’s been a full day, and we are overwhelmed with all that we’ve seen, the stories we’ve heard, and the people. So many inspiring people.

When we say our farewells to the GBS team, I’m overcome with gratitude and I burst into tears. Kusum hugs me tightly, and all I can say is “Thank you, thank you so much for this perfect day.”

I have wanted to visit India since I was four years old, since I first saw photos of painted elephants, of women in their graceful saris, of the palaces and jungles and temples.

And now I can say that India was everything I thought it would be, and so much more. I rode not one but two elephants (Babi and Lakshmi). I marveled at the beauty of opulent palaces. I paid my respects to Hanumanji in a temple that was built hundreds of years before my country was even founded.

The way Puja waved and waved to me, running alongside the van as we drove away down the rutted dirt road.

And the goat, that soft, sweet baby goat that Rekha put in my lap. I had mentioned, when Bhawani introduced me at Gaonli village, that I thought baby goats were cute—so she gave me a goat. And although I couldn’t keep it, it was the best gift anyone’s ever given me. LaDonna Willems is the woman behind the words at Tea. (Her official title is Copy Director.) She lives in San Francisco with her husband, four-year-old daughter and two-year-old dog. She loves long walks on the beach, sweet iced tea, Buffy the Vampire Slayer and, yes, baby goats.

More than a Uniform

Education Levels Around the World