Through the Eyes of...

Through the Eyes of Oscar and Betty Blair

In our new series, Through the Eyes of, you’ll hear directly from children; Children who have a story to tell. They’ve lived abroad and visited a new city for the first time. They’ve traveled hours by plane to meet their grandparents for the first time and traveled ten minutes by car to visit their local museum for the fifth. They live in Italy, Denmark and Michigan. They’re the little citizens of the world experiencing the everyday magic that surrounds them and they’re sharing their stories with us here.

You may know their mother, Gabrielle Blair. She is a designer, Design Mom blogger and ALT Summit co-founder. After 8 years in New York and almost a year in Denver, they moved their family to France to experience another culture and learn a new language. After 2 1/2 years abroad, we knew Oscar and Betty would the perfect pair to help us kick off this series!

My name is Betty Blair, and I am 7, almost 8. I have 5 siblings, and my favorite color is turquoise. A board game that I really like is Clue; I like to read a lot, right now, I’m reading Harry Potter and the Goblet of Fire. Right now I’m on page 133.

My little sister is 3 years old. My brother is 9, my big sister is 12, my biggest sister is 14, my oldest sibling (brother) is 16. I like reading together with my family, and playing games, and jam sessions where we all sing songs and play music together—I only sing, I really love to sing. We also film videos, the series is called Olive Us. It’s basically about the kids in our family having fun adventures. 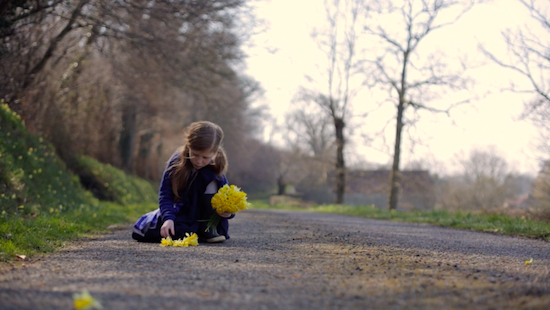 Tell us what life was like living in France.

A regular day, we went to school, it was a French school. On the drive, we would always pass by a church that was built in like 1400 something, and we would all shout: “Eglise Saint Germain d’Argentan!” That was the name of the church. At school, we worked on reading and writing and math and other subjects. Sometimes we would walk to a nearby pool and swim there. That’s where I learned to swim. Sometimes, we would walk to a ping-pong center and learn how to play ping-pong. When school was over, my Dad would pick us up. While we were waiting, we would play on the playground. I started in pre-school, it was called Maternelle, then I went to Kindergarten, it was called Grande Section, and I went to 1st grade, it was called CP. In Kindergarten, we learned to write our name in cursive, in CP, we really learned to write in cursive. The school lunch was SO good! I liked it better than school lunch here.

I really liked it in France. Sometimes I still wish we lived there because I had a lot of friends, and everybody was really nice. I also really liked our house in France, we had a big open back yard, and the house was really fun because it was like 300-400 years old. We also lived out in the country, by a lot of small farms, so we could buy eggs from our neighbor, and milk from our other neighbor. The bread was really good, and I also really loved cucumbers, and I loved the butter and milk. We also got fresh creme—called creme cru, kind of like sour cream, but yummier, and I really liked it.

Also we lived close to Paris, it was only 2 hours away, there was a really yummy ice cream shop that we would always go to when we went to Paris. It was also really exciting to see the Eiffel Tower, and the Arc de Triomphe whenever we went to Paris.

What was it like moving to a new country? I was sort of scared when we first moved—I didn’t know what I was doing, I didn’t really know how to speak French. Then we arrived, and I learned French, and now I’m fluent. It took maybe 5 months for me to feel comfortable in French, and after maybe a year and a half, I was fluent—so I could do all the school assignments, and I could ask the teacher if I had any questions. I was the only English-speaking girl in my class.

Where did you hang out with your friends? A few times, I had a playdate where a friend came to our house, or I went to their house. Sometimes there was a festival in the town where I would see my friends.

What is your favorite memory from living there? Some of my favorite memories were going to the bakery and getting mini tarts. I also really liked picking wild blackberries down the street from our home—there were lots of berries, and all the neighbors would pick the berries at different times and put them in their pails. I liked eating the berries while I was picking them, and also eating them with cream after. Yum! I also liked picking wild flowers by our home in the Spring. Every spring, the hillsides by our home would be like bursting with yellow spring flowers, and we would pick them and make bouquets. I also liked going on trips with my family to different parts of France or Europe. 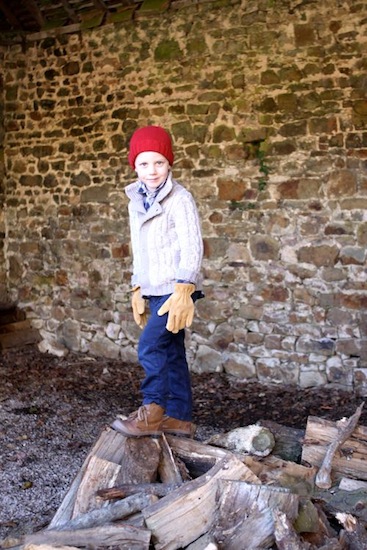 I’m Oscar Blair, and I’m 9 years of age. I like adventure, like climbing trees, nerf gun fights, and I like Mine Craft. My family has 8 members, my Mom and Dad and there are 6 kids. I’m number 4. I like to hike and go swimming with my family.

Tell us what life was like living in France.

For breakfast I would usually have Nutella toast, or jam toast. We had Nutella all the time, and I really miss it. I know we can get it here, but we just don’t. I would go to school, the school lunch was really good. My favorite thing was the fries—they were just good for some reason. Another thing that was good was the cake. Who doesn’t like cake? School was all in French. It was really hard at first, but I got used to it.

There weren’t that many toys to play with during recess, just jump ropes and balls. School felt shorter there, even though it was actually longer. We never had school on Wednesdays, and we had a two week vacation every 6 weeks.

What was it like moving to a new country? It was hard to understand French for a while. It wasn’t scary because we thought we knew French even though we actually didn’t. People were really nice and helped me a lot, even when I didn’t speak French. Early on, my teacher would speak English to me to help, but she would speak with a big French accent. Eventually, I learned to speak French fluently.

What is your favorite memory from living there? One of my favorite memories was getting baptized in a freezing cold river by our home. I loved going to the local swimming pool too. It had the best slide ever, and a very shallow place for the kids, and we couldn’t wear regular swimming shorts, we had to wear like speedos. I liked stacking the wood for our fire place and helping to start the fire.

I loved the pastries! I loved creme puffs (they were called tropeziennes, but we called them creme puffs). I also loved picking strawberries and raspberries from our backyard. Apples were really popular in our area, and I loved going to see apple farms and drinking apple juice. And I loved the crepes!

I also loved traveling to other places in France and Europe, a favorite memory is jumping off a high dive into a lake near Berne, Switzerland.