Across the Globe Discovery and Exploration Giving Back

We’d heard that the Jiuqian Music & Arts Center was just 15 minutes from our Shanghai hotel. But the Chinese-speaking driver just kept driving and driving… An hour passed and we were officially very, very far from the urban, international city of skyrises.

The driver slowed down, checked his map, then pointed out at a field, and looked at me with a very puzzled look. “I’m beginning to think this is a wild goose chase.” Adam, my 7 year old son asked, “What’s a wild goose chase?”  I assured myself that this would be a story to tell for years to come. But I also couldn’t stop thinking about how much my family needed a bathroom after a long day out and about in Shanghai. We turned around, nearly giving up but then we saw the address posted on a small gate into a set of four industrial buildings. I’m pretty sure the driver was disappointed we weren’t headed back to Shanghai, & that he was stuck with us out in the middle of nowhere.

An older Chinese man pointed us to building 4 – just like it said in my email.   He spoke to us in Chinese; we spoke to him in English. We communicated through the language of pointing. We entered building 4, walked up the stairs (just like the instructions said) and entered a hallway. At this point, we could hear the universal sound of kids laughing & playing. Who says that English is the most international language? We met our hosts and the translator, apologized that we were late – but no one seemed to mind. Children kept peeking out at our blond boys. My husband snuck off for a quick bathroom break – too tempted by the bathrooms even with the Chinese style toilets. Unfortunately, when he walked out, our host pointed out the Chinese symbol for “girl.”

First room had a ping pong table & then a computer lab. Adam was attentive – so many screens in one room! We asked about how the kids used the computers. “Powerpoint.” Powerpoint? Then Adam stepped to look at the key board.   “But it’s the same keyboard we have at home! Do they have Chinese keyboards?”   The host showed him how he could key in “Xie Xie” and get choices of characters … including the one for “Thank you.” 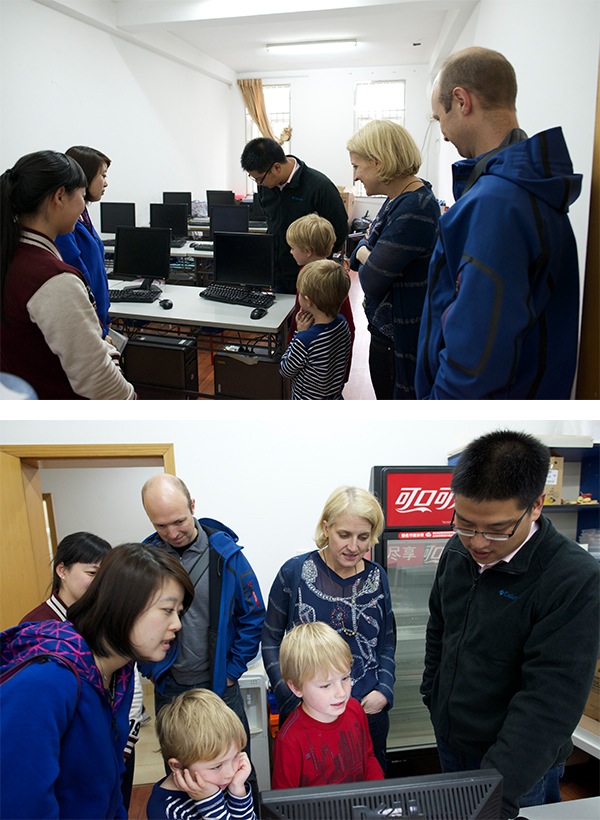 That’s when the center’s kids couldn’t resist any longer and came pouring in. A dozen hands reached out to touch Matthew’s cheeks. It is hard anywhere in the world to resist touching the 5 year old’s perfect cheeks. The kids were laughing, smiling — squealing with excitement. They asked in English: “How old are you?” “What is your name?” “Where are you from?”. They surrounded Matthew like he was the star quarterback after completing the winning touchdown. They lifted him up in the middle of their huddle! Even my shy guy couldn’t help but smile. They tried to do the same with Adam, gave it a good heave, but he was too heavy. Everyone laughed. 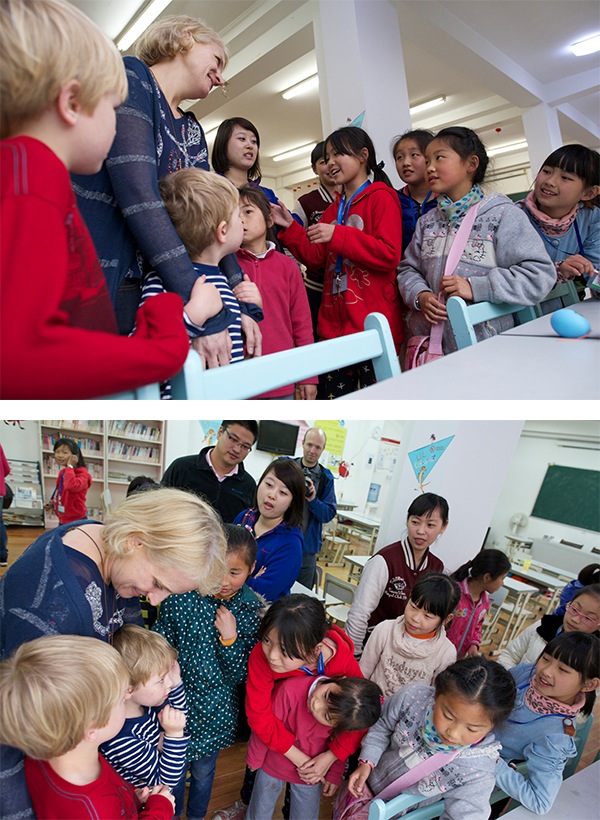 The instructors led us to the music room. It was then that the dozen or so boys and girls and my family of four fell silent as three musicians took turns performing on traditional Chinese instruments. It was transcendent. 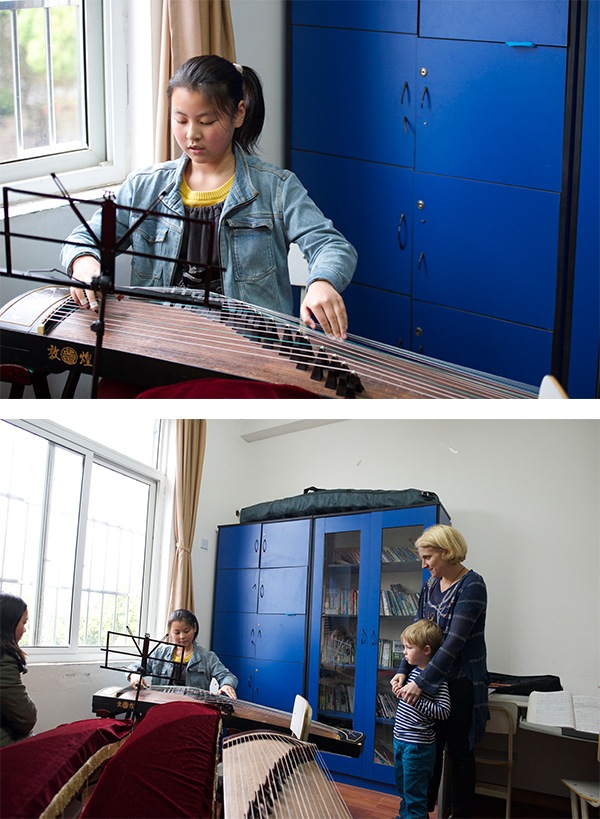 Our family journeyed to this place from the Bay Area, a world of material abundance.   Here we were amongst a couple dozen children of migrant families who had journeyed to Shanghai for work. The Jiuqian Music & Arts Center offers a safe and vibrant place for the children after school. The children have friendship, music, art, laughter, and a strong sense of community.

After the musical performance, my family gathered with the leaders and two of the musicians. The girls were easy to laugh and to smile and answered our questions about school, life, and the future. Because they are from migrant families, their prospects for advanced education are limited, but their spirits and optimism are not deterred. As we finished the conversation, the girls presented us with notecards that the children had designed and had printed. 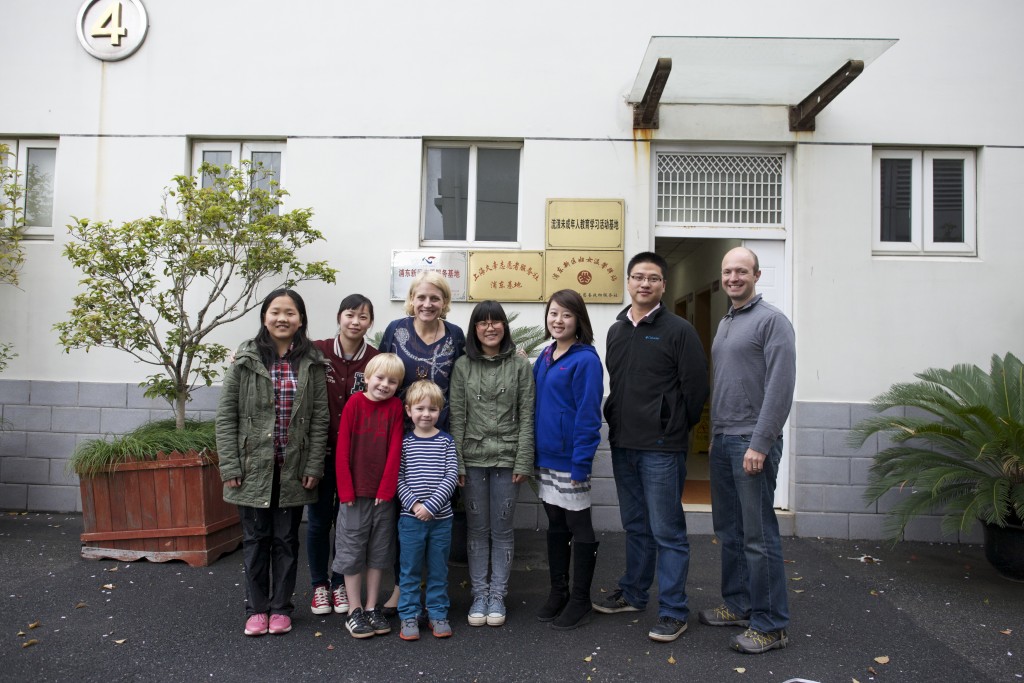 As we walked out of the center and took some of the awkward but beautifully meaningful group pictures, we were full of joy. We climbed back into the van and asked our boys about their impressions. Adam observed, “Everyone was so happy. They don’t have a lot of things or money but they have each other.”

Truth from a second grader: The Global Fund for Children is supporting this Art & Music center that isn’t about giving things or money – it is about creating community for children. And it is this community – “having each other” as Adam says, where happiness and the good life truly resides.