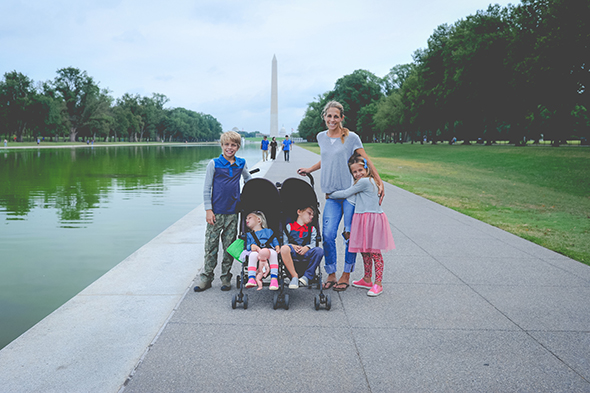 Meet Nicole Hensley, mom of four beautiful children and the writer and photographer behind the blog Golden Babes in the Sun. Here at Tea, we believe in making the foreign familiar for all little citizens. Whether its traveling across the globe or across the street, there is so much out there to open their eyes to. We’re thrilled to have the Hensley’s as our first Foreign Correspondents in Washington, D.C..  Follow along! 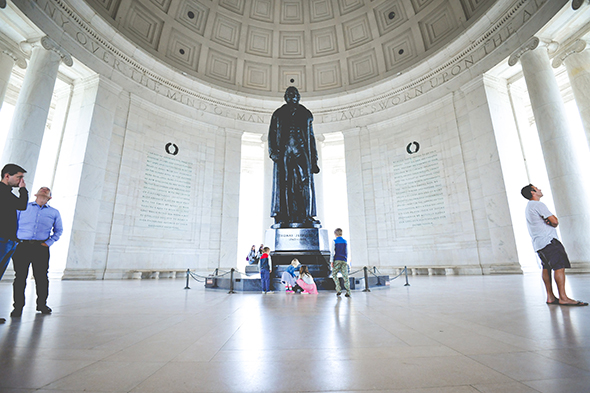 I absolutely love basking in the beach life Florida offers my family year round; however, with that we compromise the traditional seasonal changes at home. Therefore, it has become our family tradition to head North each fall to experience the true beauty of the season first hand, and in full color! This year we chose to visit our Nation’s capital city of Washington, D.C.

Visiting Washington, D.C. was an especially important destination this year not only because it stands out among the beautiful cities for fall foliage, but it has also become the center stage in every media outlet available as the 2016 Presidential Candidates campaign. This meant that I had the unique opportunity to educate my children on the historical significance regarding the Presidential responsibilities, and to encourage them to apply that knowledge to our nation’s current events. After all, it is my desire to raise responsible – and involved – *little citizens*. 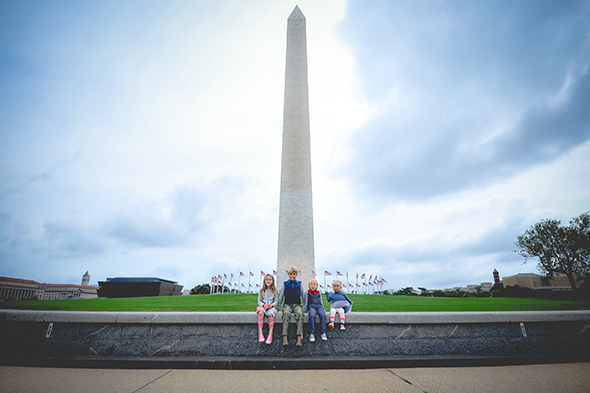 Turns out, this mama really did know best – traveling to Washington, D.C. brought up so many new, amazing conversations between my children and I that otherwise maybe wouldn’t have happened for years! I place great value on welcoming open conversation, and I believe engaging with my children on various topics leads to more meaningful connections between us. Despite their young ages of 2, 4, 6 and 9, together we discussed topics like equality, freedom, human rights, mentorship, religion, and war… All indisputably hard topics to discuss (even for adults at times!) Yet, we managed to have open conversations (at age appropriate levels) that initiated an appreciation for such values in their culture. 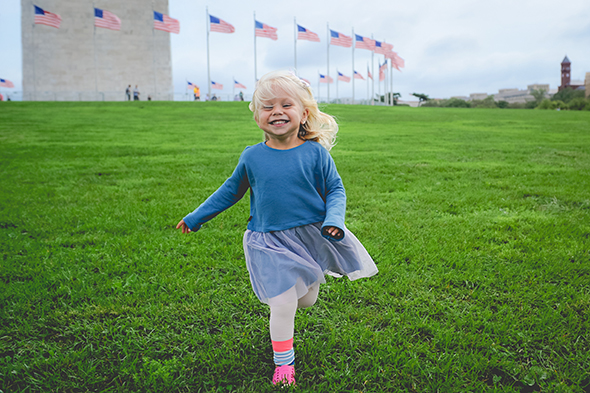 We learned about the very first President of the United States of America, George Washington. We picnicked on the hill below the monument in his honor, the Washington Monument. I shared with them the famous legend of him chopping The Cherry Tree! It was here we talked about honesty and why this character trait is honorable… and then they all raced away back down the iconic hill! 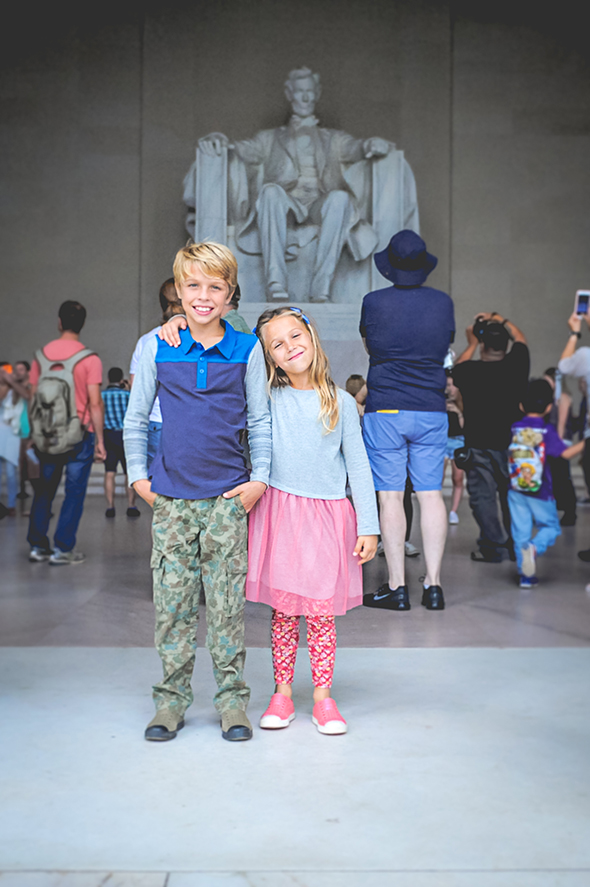 We also visited the Lincoln Memorial, where the races ensued! Have you all seen the steps up to the Lincoln Memorial?! Safe to say this one was a win for the kiddos (I wasn’t nearly as quick!) At the top, we took the obligatory picture with “Honest Abe”, and I quizzed the kids on what coin he appears. My oldest were quick to answer, “the penny!” I promised them each one for answering correctly (although I’m not convinced they were impressed with the reward!) 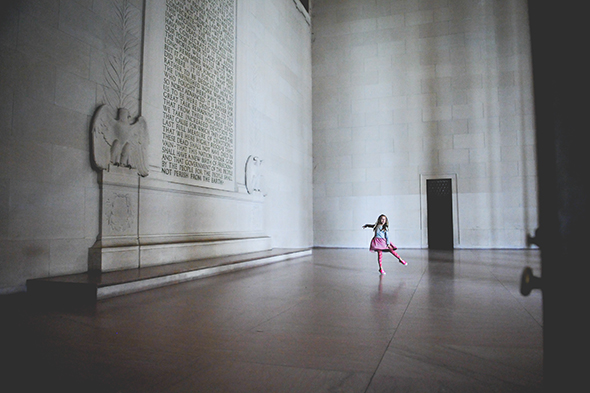 As we began to leave, I counted heads and realized my oldest daughter was behind… she took advantage of the less populated area of Lincoln’s monument for an impromptu ballet performance that I had to capture! After all, it’s the everyday “kid” moments that make these memories extra special for me.

Before leaving the mall, we visited the World War II monument as well. The children enjoyed finding their home state on the monument and shaking the hands of Veterans who were there… and I’m not going to lie – they loved the water display the most! 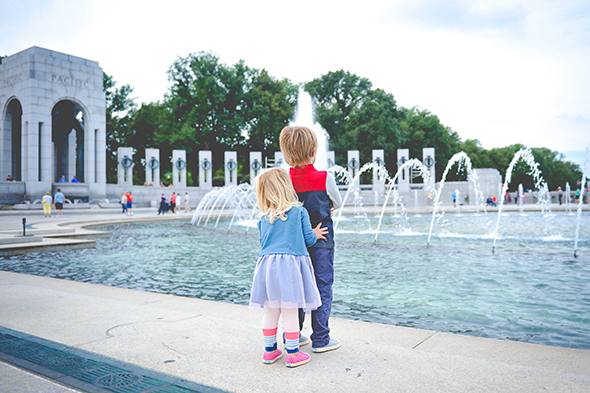 Although we didn’t go inside, as we walked the city streets we found a beautiful view of the Capital Building. Having already visited Jefferson’s Monticello home earlier in our vacation, as well as his monument, my children found it interesting to learn that this building design was selected from a contest he launched to find the best architect!

I do believe in saving the best for last… we ended our day visiting The White House. We were hoping for a glimpse of President Obama, but we didn’t get so lucky. It was an important stop, nonetheless. We talked about what we think the President’s bedroom looks like, how he can likely have cupcakes anytime he wants, and how cool it would be to stay the night there just once! We also had fun guessing which Presidential candidate would be moving in next year! November 8th is just around the corner – as we all go out to participate in the voting process this year, I’d like to believe this trip will stir an interest in my children and that they will anticipate with me the announcement of our great Nation’s newly elected President. In the years to come it is my hope that they will retell me stories from all of our fall trips, but that this one may stand out in a way that empowered them each to become proud citizens of the U.S.A. 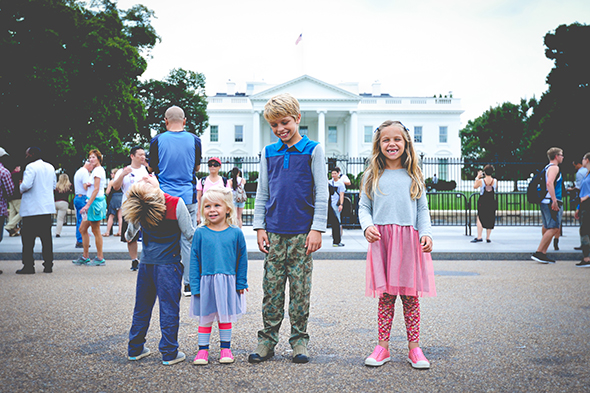