Make it a holiday full of stories! Inspired by the folklore of Scotland, our legendary tees tell quite a tale! From front to back, each one-of-a-kind graphic has its own unique story, making them the perfect gift for curious little citizens!

Guardian of the gates to secret worlds and the treasures of the universe, this sparkling female dragon pays homage to the many fierce, fire-breathing creatures in Scottish folklore.

Will O’ The Wisp Graphic Tee

Popular characters across many Scottish folktales, Will O’ the Wisps are said to be glowing, fairy-like beings who lead nighttime wayfarers astray. Charmed and curious, travelers would follow the floating lights, mesmerized by their whispers and promises of great fortune. But no matter how far they followed, the beacons of light would eventually fade, leaving dreamers and treasure seekers empty-handed and alone. 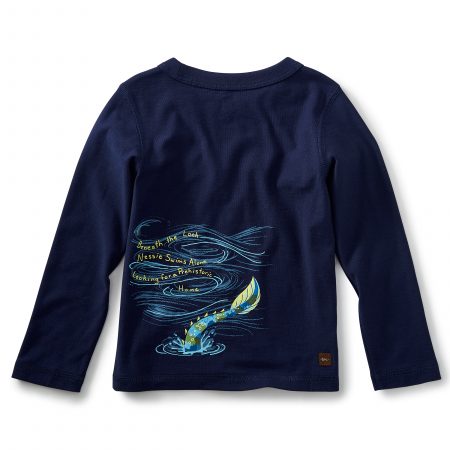 No visit to Scotland is complete without a stop at Loch Ness to search for the infamously shy sea monster. As legend has it, Nessie (or An Niseag in Gaelic) the “water beast” was first spotted in 1933 by a London visitor who claimed to have seen a strange, prehistoric dragon-like creature bobbing in Loch Ness.

Modern day enthusiasts believe Nessie to be a descendant of a species of dinosaur, but since he’s been in hiding, there’s not enough evidence to lay scientific claim to this theory. And so the mystery lives on!

Furry, funny and fictional, legend has it the rare, wild haggis of the Scottish Highlands are rather odd looking. A mammal with many unusual features, the legendary animal is said to have right and left legs of different lengths, enabling them to scurry ever so swiftly up and down the steep Highland cliffs. And though it’s covered in long, mane-like fur, tales be told it’s delicious to eat.

A Scottish twist on the classic mermaid tale, the selkie is a magical creature who can transform from a seal into human form.