The Korean Dragon – A Hodgepodge of Creatures

While looking through the travel photos from Korea, I noticed over and over again that all the dragons looked like they had antlers.  Now, I have seen dragons with horns, but these were definitely antlers – like Bambi’s father had.  At first I thought it was a little odd, but since I kept seeing it over and over again, I decided to do some research.

Dragons with antlers from Tea’s travels:

The first creature I came across was actually not a dragon, but the Kirin.  A Kirin has a dragon’s face, deer antlers, a lion-like body and hooves.  Since many of the pictures our team took were from Korean temples that only featured the face of the ‘dragon’ I figured I could have been looking at a Kirin and not a dragon at all.  The more I read about the Kirin the more intrigued I was.  The Kirin is a gentle, nature-loving creature.  It is said that the Kirin would never hurt anything in the natural world; in fact it is so gentle that it can walk across the grass without crushing a single blade.  The Kirin also has the power to walk on water.

Pictures of the Kirin: 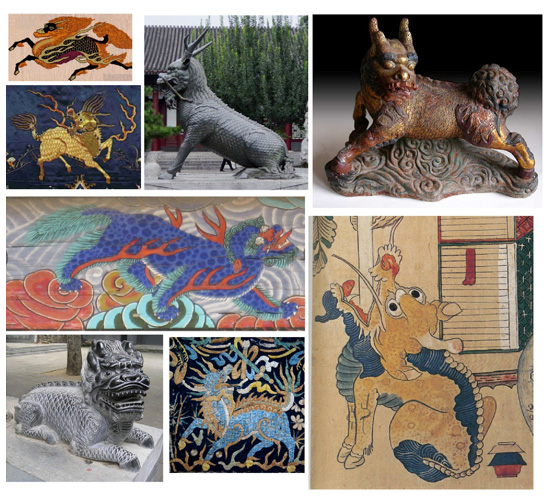 I thought I solved the ‘mystery’ of the dragon with antlers but I was still curious about the actual dragons of Korea, so I decided to keep researching.  Like the Kirin, the Korean dragon is also benevolent and peaceful with a strong connection to nature.  There are three types of Korean dragons:  Yong, the most powerful, protects the skies, Yo is a hornless dragon who lives in the ocean, and Dwell is a dragon that lives in the mountains.  The Korean dragon is also a symbol of protection; it is believed the Korean dragon protects humans and wards off evil spirits.  For this reason dragon masks are a common feature in Korean homes, especially on doors to protect the household.

Tea’s dragon mask shirts and our travel images that inspired them: 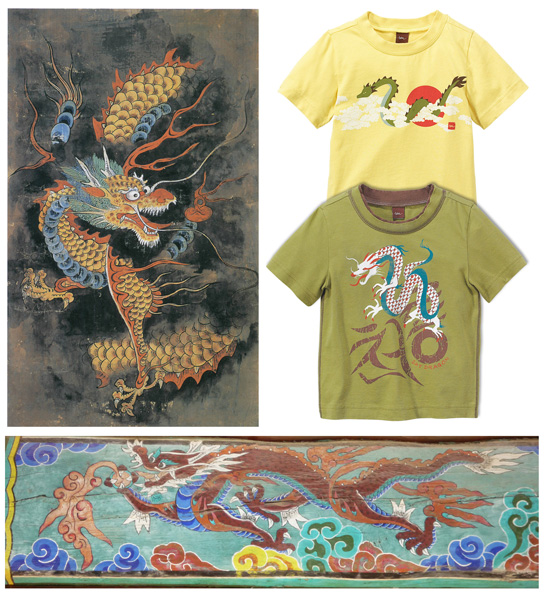 While the exact make up of the Kirin and Korean dragon is hard to determine, since different sources say different things.  It is clear that these wonderful peaceful creatures come from the imaginations of people who have great respect for wildlife.  By combining some of the most unique features of different animals, they create a powerful, God-like creature that embodies the love and respect the Korean people have for the natural world.

These Tea tees celebrate dragons with features from many different animals: