Our second  Foreign Correspondent has returned from her travels! Stacy, her husband, and her two children traveled to Istanbul and Jerusalem this summer. We outfitted them with a suitcase full of Tea before they left, asking them to share their adventures with us upon their return. Below is part 2 of their adventure.

We set an ambitious itinerary for the last full day in Istanbul before traveling to Jerusalem.  It included the Topkapi Palace, the Hagia Sophia, the Blue Mosque, the Basilica Cistern, and the Grand Bazaar. 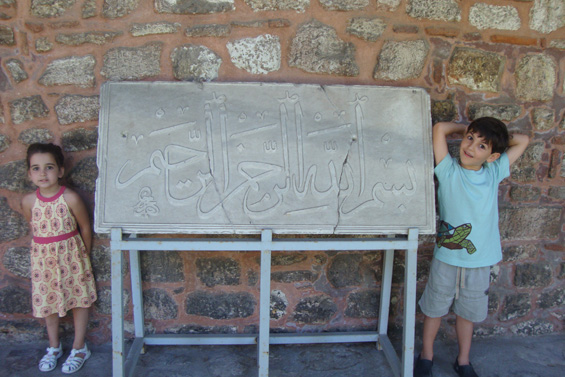 We started at the Topkapi Palace and, I’ll be honest, I could have stayed there all day long but the kids burned out after the third hour. Basically, the Ottomans ruled the entire Empire from here for hundreds and hundreds of years.  It was their cultural and political center – there’s a library, the treasury, a concubines courtyard, a kitchen that fed thousands of janissaries and soldiers, mosques, reading rooms just to name a few of the highlights in the sprawling compound.  All of this plus incredibly ornate and intricate architecture and sweeping views of the water that can be seen from throughout the walled compound.

Unfortunately for us, the lines to enter the Hagia Sophia were just too long.  We kept moving a short distance to the Basilica Cistern.  Other than knowing that it is the largest of several hundred underground water systems in Istanbul, we had little idea what to expect.  As it turns out, the kids loved it.  First off, it’s dark, lit by candles and about 20 degrees cooler than above ground.  It was built in the 6th century during the Byzantine Empire to supply water to the palace complex nearby.  In fact, the water level is not very deep these days, but it is deep enough to house many fish which swim around and add to the atmosphere and the kids’ happiness.

We continued on to the Blue Mosque (Sultan Ahmed Mosque) which is truly a magnificent sight to behold – up close and throughout the city.  We sat inside the courtyard and took in the beautiful prayer tiles written in Arabic calligraphy, the stained glass, minarets.  Another cool and really helpful thing we noticed were tons of high school aged kids in blue shirts with something like, “can I help you?”, written on them.  We saw them all over the tourist spots and eventually, I asked them what’s up.  As it turns out, they are volunteers for the Istanbul municipality, tasked with helping tourists maneuver the city’s intricacies while receiving school credit and practicing their English.  Such a clever idea, and they really were very helpful.