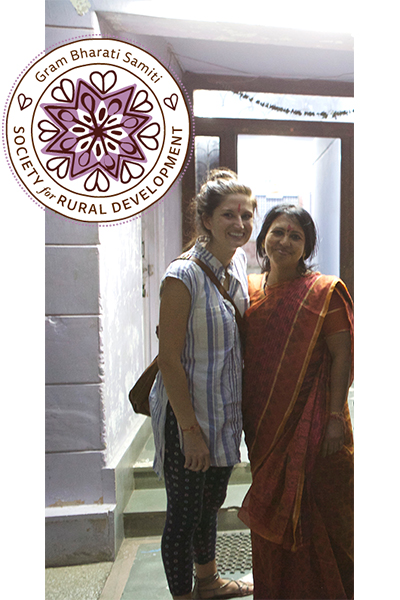 We first introduced you to Sarita here, but we wanted to give you the opportunity to hear from her first hand. While we wholeheartedly wish we could send each of you to Amber to sit down with the GBS team, share chai and listen to their incredible stories… we hope this will suffice!

In 2001, I (on behalf of another NGO) had come to participate in a youth camp located in Amber that was organized by GBS. What I learned during the five day camp was how passionate and hard-working GBS founder, Mr. Bhawani Shanker Kusum and GBS camp coordinator, Ms. Kusum Jain were. It was so inspiring to me. I knew I had to connect and work with GBS as soon as possible and I am fortunate that my request was accepted. Since then, I have been devoted to the Gram Bharati Samiti.

I am an ordinary soldier of Gram Bharati Samiti. Whatever task is assigned to be, I wholeheartedly try to execute without focusing on success or failure. Practically, as Coordinator within the Women’s Empowerment Unit of GBS, I am responsible for making the rural women economically self-reliant by providing them with vocational training and knowledge of their rights, combating violence and adopting health-seeking behavior.

As I have learned from the ethics and values of my organization, every morning I get up with a dream to do something new that could bring a smile to a woman living in poverty. Every day, I travel two to three kilometers to preform various activities. This is everything from participating in monthly meetings and supervising the units that are generating income to observing women’s health problems. Then, I go to my office that is established in the midst of the rural villages in remote Jaipur. In addition to this, I face many complicated things each day. It could be a quarrel between husband and wife or women being harassed by local police or administration. I have witnessed all types of incidents and attempt to solve them, sometimes on my own and sometimes with the help of my seniors in the office.

In 2007, there was a time when the manager of a local bank was neglecting the loan applications of the women of SHG promoted by GBS and the women were very disappointed and perturbed about their unmet needs. I personally visited the manager, but he was so arrogant that he bluntly refused to provide loans to the SHG women that year. In a large group, the women came to my office and urged GBS to form our own micro credit unit to support the women, as there was no other option. We had over two thousand women involved in SHG at that time. I took this as a challenge and discussed the issue in the Steering Committee of SHG and GBS executive members, who endorsed the proposal of forming a GBS women’s micro credit unit independently in the area. We shared the matter with key community leaders of the area who guaranteed their support in this endeavor. After initial preparations, we organized a huge meeting with all of the women members of SHG along with the community leaders, which took place on October 29, 2007. We were able to announce the formation of GBS women’s micro credit unit in the meeting of over two thousand women in the area. This unit is currently supporting five thousand underprivileged women in 110 villages of block Amer and Jamwaramgarh in district Jaipur. I am proud of this incident that led us to establish a useful forum for these women.

The stories of change that takes place in the villages GBS works with could be a longer one, as every village has several success stories. However, if I’m to only include a few…

More than a Uniform

Education Levels Around the World

The Global Fund for Children in South Africa (part 1)

Thank You for your Donation!