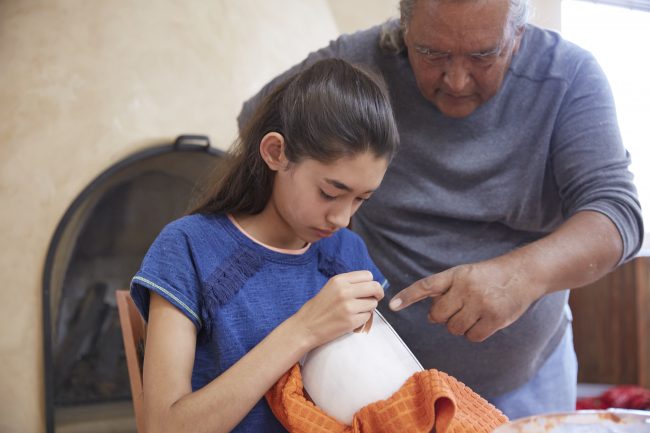 The Museum of Indian Arts & Culture opened in 1931, with a mission to collect and preserve Southwest Native American material culture. On our visit, we were so inspired by the Pueblo pottery found in the collection that we felt passionate about bringing the patterns to life in our newest Tea designs. Antonio Chavarria—curator of Ethnology at the Museum of Indian Arts & Culture, and resident of Santa Clara Pueblo—beautifully explains the importance pottery plays in the lives of Pueblo communities.

“Pottery is family. In the Puebloan view, pots, like people, are creations from the earth. Clay is referred to, and thought of, as a mother. The literal Mother Earth, or more accurately, Old Clay Earth Mother, is a nurturer of life, and from her gifts, people sustain life in all its forms, including pottery. Since their emergence from within this earth, Indian people, after many trials and migrations came to create, from the earth, vessels as aides to both material and spiritual existence. Clay in its manifesting of life and creation, plays a vital role in Pueblo life ways. Represented in origin stories, cosmology, songs, and stages of life, pottery is intricately connected to Pueblo life ways. The communal aspect of pottery making cannot be underplayed. Even members of a community who do not shape vessels or paint meaningful designs play a part in this tradition.

In the potter’s mind, a fired piece ready for sale or household use is not an end product. The process is a journey on which every completed piece marks a step on the path. For many potters, it is the path their ancestors forged; it is how the clay is gathered, how the clay slips are mixed, how the wood is gathered, how the form is shaped, and how the pot is fired. This process, steeped in tradition, cyclical repetition and cumulative action, is a journey that doesn’t end when a prize is awarded or a sale completed. The process and practice is passed on through generations, and even when teachers’ lives are interrupted by outside circumstances, we have seen the journey recreated by singular or communal acts; one person may take it upon themselves to learn pottery making and after they have grown in skill will teach others, or a village may fund a pottery making class to teach revitalize a traditional practice.

Designs can be handed down through generations of one family, or can cross family lines. Intermarriage among the pueblos is an important catalyst for bringing new forms, designs and techniques from one pueblo to another. Monica Silva, originally from Santa Clara Pueblo, married into Santo Domingo, bringing along many Tewa influenced aspects of pottery making. Designs can be inspired by older pots seen in museums or galleries, can come to mind in the middle of the night, or are momentary thoughts quickly drafted on a piece of paper.

The Pueblos adaptation to Spanish oppression by keeping religious matters private and internal is marked in different ways by each village and by individual artists. Openness and seclusion are matters of perception or degree, just as designs are. It is perfectly all right if an outsider cannot comprehend pueblo religion or design—sometimes that is the point. Sometimes the lack of specificity in an explanation is not meant to obfuscate or to frustrate, but is the result of the merging and layering of meaning and symbols, each with multiple interpretations, depending on time, place, and person. Ultimately, designs, and the pots they are painted on, can be accepted and appreciated for what they truly are, expressions of art originating from an ancient American culture.”

We also had the opportunity to speak with Pamela Kelly who played an integral part in coordinating the collaboration with the museum.  She answered a few of our questions…

In addition to preserving Southwest Native American art and material artifacts of the past, what types of programs do you offer to help support Native American communities today?
In addition to preserving the traditional Pueblo objects like pottery, textiles, beadwork, and jewelry, the Museum of Indian Arts & Culture offers exhibitions, tours, educational programs and outreach into the schools. Equally, local artists can visit the collections to study their Pueblo pottery traditions.

In New Mexico, there are 19 Indian pueblos, each with its own distinct cultural and artistic identities. Our exclusive collaboration with the Museum of Indian Arts & Culture resulted in fabric designs inspired by pottery from three pueblos—Santo Domingo, Acoma, and Laguna. Can you describe the differences in their artistic aesthetic?
While all three Pueblos are part of the same language group, each one has a distinct design vocabulary. These differences are a result of geographic realities—types of clay and paints found near the Pueblo—as much as they are about the differences between people or artists. In general though, Santo Domingo’s pottery is more graphic in nature, while Laguna and Acoma pottery combine images of animals, birds, flowers, rainbows.

What is life like within these Pueblo communities today?
The Pueblos are vibrant, lively communities where people carry on traditions from ancient times whilst living, working, and attending school in the modern world.

Stylistically, what are Acoma Pueblo artists most known for?
As with all Pueblos and each individual artist, there are many styles of pottery and forms of personal expression. The traditional Acoma style features two colors, orange and black, on white. One of their favorite shapes is the water jar, called an olla. You will see many combinations of designs that include parrots, clouds and rosettes. Some contemporary artists have developed a style featuring tight groupings of fine black lines on a white body.

What are some of the common motifs seen in the works of Santo Domingo Pueblo artists?
Santo Domingo is the largest and most traditional Pueblo. Many famous artists come from there. The majority of Santo Domingo pottery features graphic black and white designs.

What types of tools and techniques do these artisans use when crafting their pieces?
Pottery making involves many steps and is often a family affair. From gathering and processing the clay, coiling the clay to build the pot, harvesting the plants to make the paint for design, to firing and polishing, the whole process involves several family members: elders to share their knowledge, children to receive their knowledge, and the artists to direct the process. The tools used are few—simple and derived from nature. Clay of course, comes from the earth, and mixed with water it becomes pliable enough to form into shapes.

Pots are built by layering one coil of clay upon another. The shape is then smoothed and made even with the use of gourds or river rocks. The paint for the design is made from plants and minerals and is applied most often with a very fine brush made of yucca fiber. To finish the pot, it is placed in a pit, into which a fire is built. Once the fire has warmed the earth, the embers are moved aside and the pots are placed in the pit on racks fashioned from whatever might be available. The pots are again covered, and a fired is built on top of them. After about an hour, the fire is burnt out and the pots are carefully removed, cooled and then polished or glazed again with an egg based mixture.

What significance does pottery have as an art form among North American Indian cultures today? Is it mostly created for form and function, or purely as art?
Originally, pottery was a utilitarian object—one made to carry water, store seeds, mix dough or to eat from. In the late 1880’s with the arrival of the railroad and tourists, however, Pueblo potters began making pottery that would appeal to this new market. While the pottery made for tourists then, as now, often represents its original utilitarian function, today, pottery is perceived of and collected for its “artistic” value. Pueblo potters continue to make pottery for use and ceremony, but the strong collector market has encouraged several generations of artists to make pottery strictly for sale. The good news is that this interest in pottery allows many Pueblo artists to make a living employing their traditional craft.

Is the craft still taught within communities today?
Yes. In many Pueblo families there is one person who is skilled in the tradition and it is their responsibility to pass on their knowledge and skill to the next generation. It is essential to remember that pottery making, like most Native artistic traditions, is rooted in nature and ceremony. The process of creating a beautiful object requires patience, gratitude—giving thanks to mother earth for providing the clay and plants, and respect for the elders who pass on their knowledge.

We were lucky enough to make a second trip back to New Mexico… this time for a photoshoot! Getting to know the families of the Isleta Pueblo was a highlight of this past year. Stay tuned as we share their stories and traditions throughout the season. 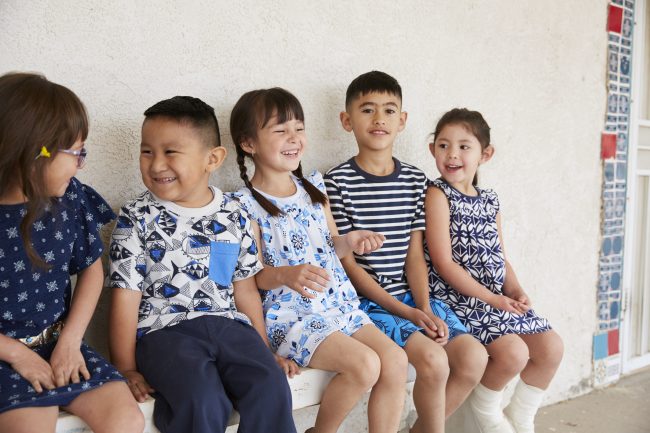