Africa’s Great Lakes Region: The Primate Capital of the World

To help everyone at Tea “go there,” we make a yearly contribution to each employee for international travel and exploration. Upon their return, our Tea travelers write a blog post to share their adventures with all of us (and the world)! Katy, Tea’s t-shirt graphic designer, traveled through Uganda and Rwanda on a quest to see every primate. Here she shares her jungle adventures. 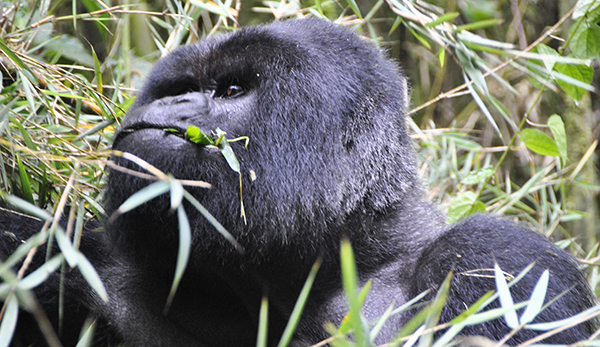 After hours of delays and three layovers I FINALLY landed in Uganda’s Entebbe airport, at 3:45 am. A few hours later the South Korean president, Park Geun-hye, also landed there. This meant that the ONE road that went between Entebbe and Kampala (Uganda’s capital) was closed. So I would be spending day one in Entebbe by myself. Since it was a nice morning, I decided to walk to Entebbe Botanical Gardens. I got about halfway there when the skies opened up into a massive downpour.  Drenched, I ran into a nearby mall and was thankful that I invested in quick-dry pants. I have been dreaming of going on this trip for at least 10 years, long before I even started working at TEA. And spending two hours in a Ugandan shopping mall was not how I dreamt of spending my first day.

What I had dreamt of doing was checking more primates off on my quixotic quest to see every primate in the wild.

Once I made it to the Botanical Gardens, I was immediately attracted to this one tree with an entire eco-system of plants living in it. In awe and trying to figure out how to best capture this impressive creation, I was startled by something moving.  Oooh a MONKEY! And then I noticed another monkey, and another. It was an entire tree full of Vervet monkeys! So maybe this wouldn’t be such a bad day after all. 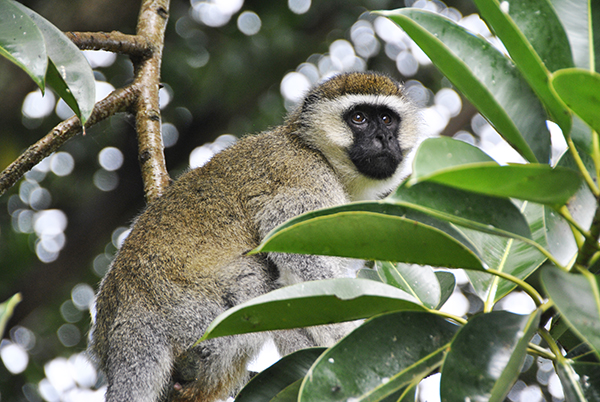 Later, very high up, I noticed three black and white Colobus. I was definitely not expecting to see them anywhere near a city. I had only ever seen them in the Bronx Zoo’s Congo Gorilla Forest, which made me believe they only lived deep in the jungle (and the Bronx). I was pretty excited—day one and two primates checked off my list. Not bad! 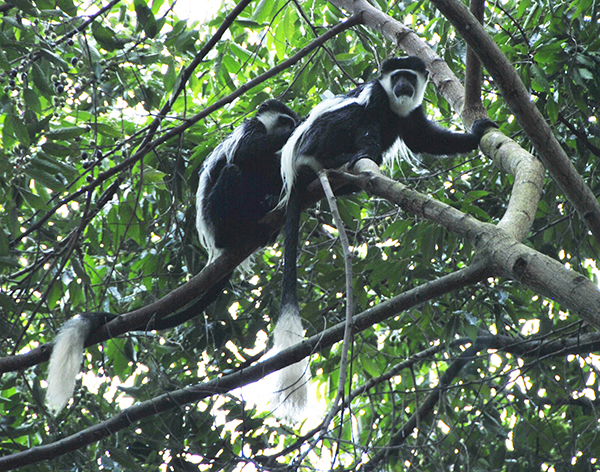 A few days later, after I met up with my travel buddy and worldly do-gooder, Nate, we spent the day chimpanzee trekking in Kibale National Park, which boasts the greatest diversity of primate species in the world. We got there when it was not-yet-bright, but very early to see the chimpanzees when they woke up. We heard “feeding calls” and within 15 minutes we had found the tree the chimpanzees nested in. They were WAY up in the trees – and I finally understood why they suggested I pack binoculars. We heard a traveling call and before I knew it there was a male chimpanzee on the ground no more than 20 feet in front of me—and he was walking right towards me. We were told to keep our distances so I wasn’t sure what to do but the guide ordered “DO NOT MOVE.” I stood perfectly still—too nervous to take a picture—and he walked right by me as if I was just another tree in the forest. We ended up having a very exciting day with the chimpanzees, we observed nest building, feeding, grooming, and mating and the crazy fights between males that followed. 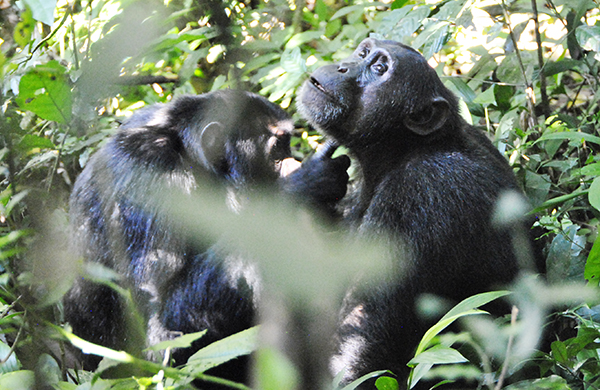 We spent 10 hours following chimpanzees through virgin forest where the only paths are those that have been trampled by forest elephants. As you can imagine, we were exhausted and decided to skip the night walk that evening. This was the biggest regret of my trip because I later learned that Kibale is the best place to see bushbabies and pottos. I know most people go to Africa hoping to see lions, but I hope to see bushbabies and I have yet to see one in the wild. Here are some pictures for reference so you can understand my obsession.

The next morning we visited Bigodi Wetland Sanctuary in hopes of seeing more monkeys – and birds, Nate likes birds about as much as I like primates. Bigodi was the perfect spot for both our obsessions. 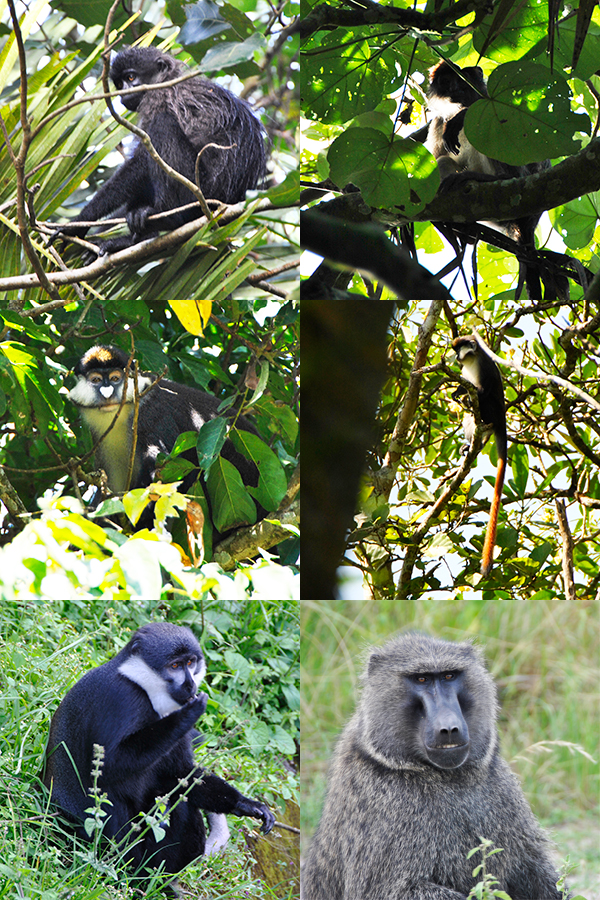 Next we spent a few days in Queen Elizabeth National Park where we saw many exciting things including pronking kobs (youtube it), a newborn hippo, mating lions, but no new primates.

And then came the big day! Bwindi Impenetrable Forest!! The hike up the mountain was on a path so it wasn’t too bad but my lungs were not prepared for the elevation. It turns out, gorillas don’t hang out on paths, so I took my first ‘step’ into real gorilla habitat. And by ‘step’ I mean a trust fall, with forest floor. It is very steep and you cannot see the ground through the dense foliage. We fumbled our way down a bit and then we heard them! A rustle of foliage and the deep grunts of the silverback. I don’t really know how to describe this experience. They are kind of clumsy, playful, magical creatures. The toddlers desperately want to play with the human primates but the silverback grunts warn them to keep their distance. This was a smallish group of about seven individuals – including the 8 month old pictured below. 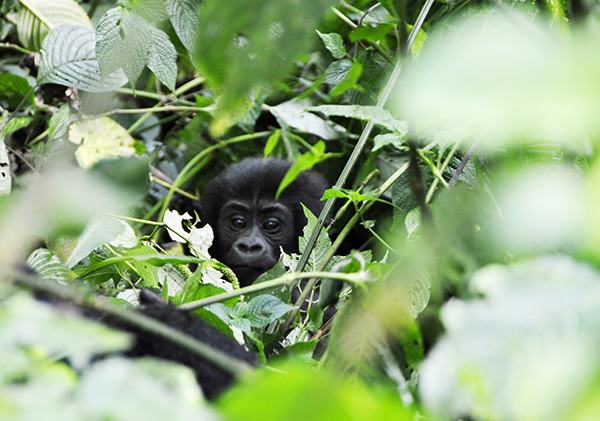 The following day we searched for the charming golden monkeys in Mgahinga Gorilla National Park. Afterwards we crossed the border to Rwanda and headed to Nyungwe Forest where I checked off three more primates. 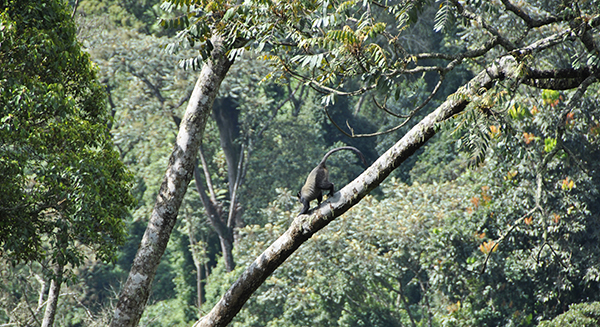 While everyone else was excitedly watching chimpanzees, I spotted a Dent’s mona monkeys way up in the trees. 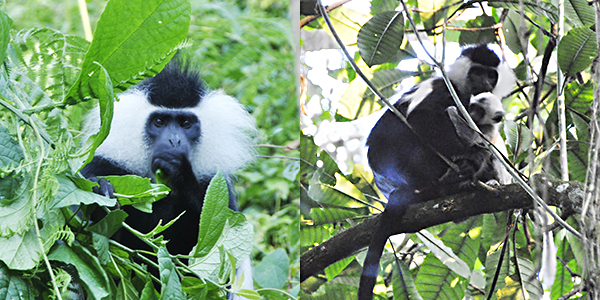 We ended our trip to Nyungwe hanging out with a troop of the friendly Angolan colobus, including a new baby. Black and white colobus babies are pure white when they are born. This one is just starting to get his face markings. And like any good primate nerd, I ended my trip in Volcanoes National Park, so I could spend one more day with the magical mountain gorillas. 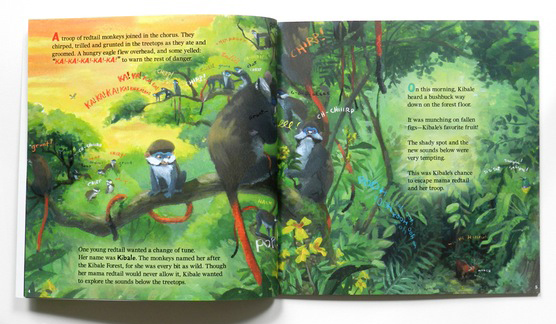 Want to engage your children in conversations about science and conservation? I suggest the beautiful book by Eric Losh – The Chorus of Kibale. It introduces you to the primates of Kibale Forest and many of the other creatures who live there. And as a bonus, half of the proceeds from the book go to the Primate Education Network. 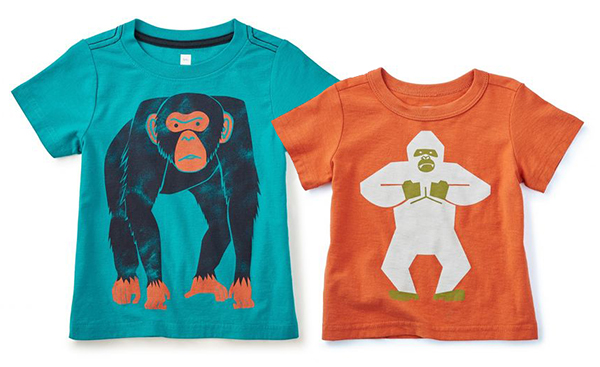 Or you can get our Chimpanzee or Gorilla shirt for your little one!

Primate Checklist For This Trip