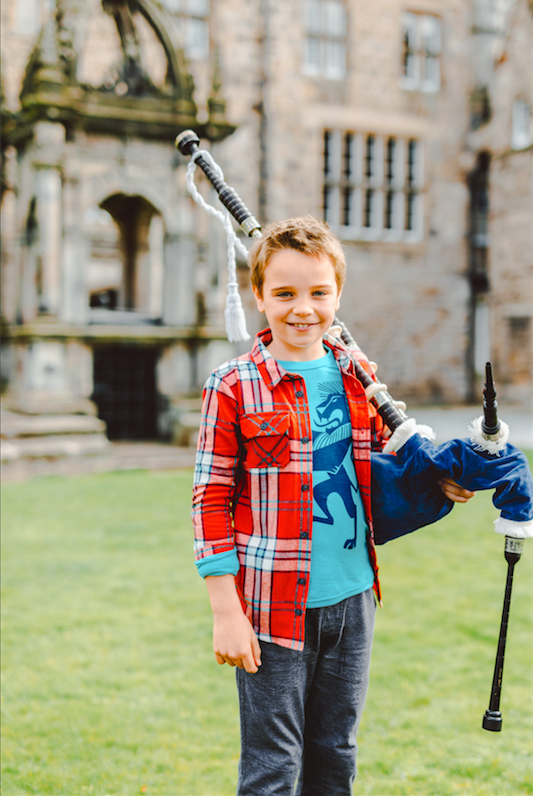 10-year-old Henry from Ratho, Scotland is a lot like other kids his age. He loves to watch TV, horse around with his friends, and play sports. Quite an impressive list of sports, actually: cricket, football (soccer), tennis, rugby, swimming, diving, gymnastics.

Henry says he’s wanted to play bagpipes for as long as he can remember. “I just love the sound of it and I like watching it.”

So at age 7, Henry started bagpipe lessons. It’s not as simple as it sounds—you don’t just pick up the instrument and blow. You have to take it apart and learn it in pieces.

First, Henry learned to play the chanter—this is the part of the pipe that looks like a recorder, with finger holes that the piper uses to create the melody.

Once he was comfortable with that, he moved on to the goose. This is the bag part of the bagpipes, essentially an air bladder that the piper must inflate with his breath before he starts playing.

After a year of learning on the chanter and the goose, Henry graduated to the drones—the pipes. The drones are long tubes with single reeds that fasten onto the goose. When a piper starts to play the bagpipes, the drones emit one continuous sound—that instantly recognizable droning bagpipe sound—and then the melody is played over that with the chanter.

Three years into his bagpiping career, Henry can play a whole repertoire of songs from memory. His favorites are the “Flower of Scotland” (Scotland’s national anthem), “Highland Cathedral,” and “a whole lot of jigs.”

“He earned about £170 an hour, playing at the rugby games,” said Henry’s father Paul. “He saved it all up until he could buy his own pipes.”

Paul stood quietly for a moment, watching Henry reel off another jig on his bagpipe for us.  “He is a talented wee boy,” Paul said softly. “I’m very proud of him indeed.”